I feel bad for MPJ. At least he stayed healthy long enough to flash his elite talent and get the Max deal. Sadly for Nuggets he's gonna anchor their cap space now.

Can we get Isaiah Stewart to play on the Browns D-line? Guy is relentless

I know we don't have a good track record with coaches. Was just shocked that in 36 years, Luke Walton has their second highest winning percentage for a coach and he was terrible.

Rich said:
That was extremely embarrassing for Cunningham.

Like, would you pick Devin Booker #1 overall? Because that's the mold of player he's in and his ceiling.
Click to expand...

If I knew he would turn into Booker? Yes. Sure beats drafting an Anthony Bennett. A better way to frame it would be to say you wouldn't draft a Booker over a Mobley. But then again, the big concern with Mobley was fragility with his slight frame... And here he is, out several weeks into his rookie season with a sprain already. I suggest we wait a season or two to really see who meets, beats or fails their expectations here.

DirtyDan said:
Can we get Isaiah Stewart to play on the Browns D-line? Guy is relentless
Click to expand...

NMCav said:
I feel bad for MPJ. At least he stayed healthy long enough to flash his elite talent and get the Max deal. Sadly for Nuggets he's gonna anchor their cap space now.
Click to expand...

Yeah I feel even worse for the Nuggets than I do for MPj. Bad for him too but at least he’s got a hundred million dollars to ease the pain

Rich said:
You know the Kings are the reason I cringe when Cavs fans say things like "Well, another lottery pick is probably the best thing for us long-term."

The Kings now on more than one occasion thought they had a franchise player to build around. Cousins, Evans, Fox.

15+ years now their fans have been saying "well, just one more lottery pick, and then we'll be good to go!"
Click to expand...

cavsfever said:
Yeah I feel even worse for the Nuggets than I do for MPj. Bad for him too but at least he’s got a hundred million dollars to ease the pain
Click to expand...

Why? Multiple teams medically red flagged MPJ. Teams and Doctors knew the risks invovled with drafting him. Said risks don't just go away. I don't feel bad for teams who do stupid things. It's sad but they did this to themselves.

cavsfever said:
Booker averaged 28 ppg in last years Finals, and 27 ppg overall in the playoffs. That’s in his first playoffs ever at the age of 24. He played decent defense too. It’s just silly to say he doesn’t have #1 pick talent. I mean, I get that he’s not that efficient a scorer and there are many annoying things about his game. He’s not going to be a top 20 player in the history of the game or anything. But he’s very very good. The only way you wouldn’t be happy with him as a #1 pick is if you want to pontificate about what an ideal top pick would be in the abstract or something
Click to expand...

No, when I'm picking first I'm looking for a franchise cornerstone who can take a bad team and make it a good team.

Not a nice, solid player who may or may not be a top 20 player in any given season.


Devin Booker saw nothing but losing seasons until Chris Paul got there.

That's not what I'm looking for at 1. In any draft.

I'm looking for the Zions and the Lukas.

IN this draft we got Kevin Garnett and they got Devin Booker and that is a major win for us and a major miss by them.

Just a random observation that Demar DeRozan is off to an awesome start in Chicago. He’s not quite an MVP candidate, but closer than you might think. Anyway, I’m happy for him.

(I haven’t been following this thread, so it’s possible this has been mentioned already.)

Kings screwed themselves royally by not taking the obvious pick in Luka Doncic.

If that's us taking Bagley on draft night, we are losing our collective minds and we don't care that we have Fox even. Luka was oozing with greatness, how the Kings looked over that is beyond me. They deserve to be the wasteland they are.

If you want to see what pure panic and anxiety looks like in text form, read this article from the Denver post on MPJ 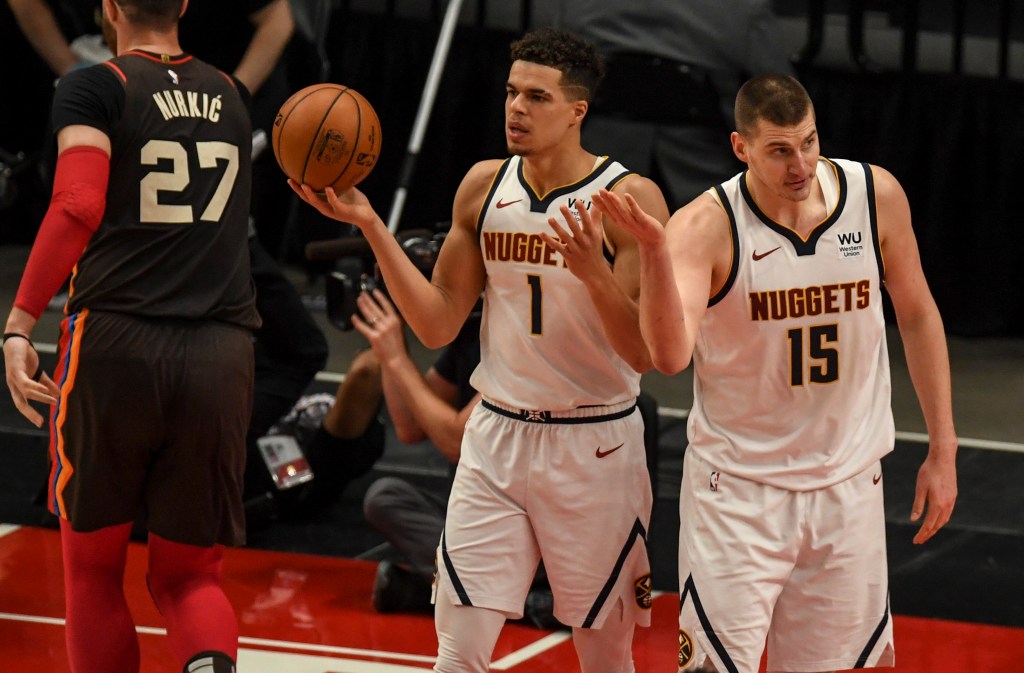 It's code red over there.

DirtyDan said:
If you want to see what pure panic and anxiety looks like in text form, read this article from the Denver post on MPJ

It was stupid to offer that extension when they did. There's a reason his back was medically red flagged, but everyone seemed happy to ignore it the past 2 years, anointing him a star in the making. At this point, he's just going to be another what if in a long line of talented players cut short by injuries.
You must log in or register to reply here.
Share:
Facebook Twitter Reddit Pinterest Tumblr WhatsApp Email Share Link