Kiddo said:
Reyes and Bradley hitting bombs back to back in the lineup would be pretty dang awesome.
Click to expand...

Yes it would, and while I'm impressed with his hard work, what has he done to reduce his strikeouts and make more contact? I'm hopeful, but my expectations are tempered. Regardless, I love hard work and commitment.

yep.. bradley will be in the best shape of his life.. maybe that will matter...

Man, that swing looks awfully long. I'm sure the hitting coaches and coordinators will be working with him to speed up his bat, although he does seem to drive it with authority from the pull side.

Freeman looks like he’s starting to fill out. Heard he showed more power at the alt site last summer.

Man, that swing looks awfully long. I'm sure the hitting coaches and coordinators will be working with him to speed up his bat, although he does seem to drive it with authority from the pull side.
Click to expand...

With International Signing day coming Friday, where are all the guys who posted these updates?

It will be an interesting this year to see the additional talent coming into the DSL/Arz ....

We heared about 2018 class with Gabriel Rodriquez now 11th rates prospect for Indians (#9 international prospect). Yet, we don't hear much of Sanquintin who was the #16 international prospect. Both kind of struggled in DSL but Rodriquez was brought state side and Sanquintin moved from Co-op DSL to Indians DSL and improved his avg to .300+ post-all star. You also had A. Martinez (#39 int prospect -- our #22 our prospect now - hit .300), Romero, Lara and Frias as the mid-level signees.

Unfortunately in 2019, the Indians seemed to back off the spending at least on top end and just signed Pastrano to a million+ contract and Durango got $650,000. Haven't heard much on this group due to COVID.

This year's group has 2 top 25 prospects in Genao and Alduey with Lopez close behind. Genao and Alduey have 3 - 55 grades and 2 - 50 grades (in MLB pipeline - no overall grade yet) so this seems to be a deep top group as that was equivalent to Gabriel + range.

Will be interesting who in these groups breaks out this year and rise up our prospect boards. Its also the 2018/19 group that will hit Rule 5 early without much actual developmental training state side as they lost a year. I assume this Jan 21 and Jan 22 group will be okay as they will start playing in July anyways.
P

Just as an FYI to the rest, the Fan based community voting for Tribe prospects has started over at Lets Go Tribe.
So far the voting has:
1) Nolan Jones
2) Tristen McKenzie
3) Tyler Freeman
4) George Valera

Likely to see a graduate or 2 this year.. Hopefully big years from Valera, Espino, Naylor etc. occur as they will likely be in the top 100 for 2022 with strong seasons.
Last edited: Jan 21, 2021

MadThinker88 said:
Courtesy of Justin Lada on twitter this morning (1/21/21)

Overall rankings for each prospect:

Per Baseball America a total of 5 other #Indians prospects were considered for the top 100 to start the year.
SS Gabriel Arias
2B Aaron Bracho
C Bo Naylor
SS Brayan Rocchio
OF George Valera

Note: This blogger has been posting about every MLB club for a few years now. I guess he is located in Japan as the page 1st loads in Japanese. Make sure your Google translate is enabled & the page quickly converts over 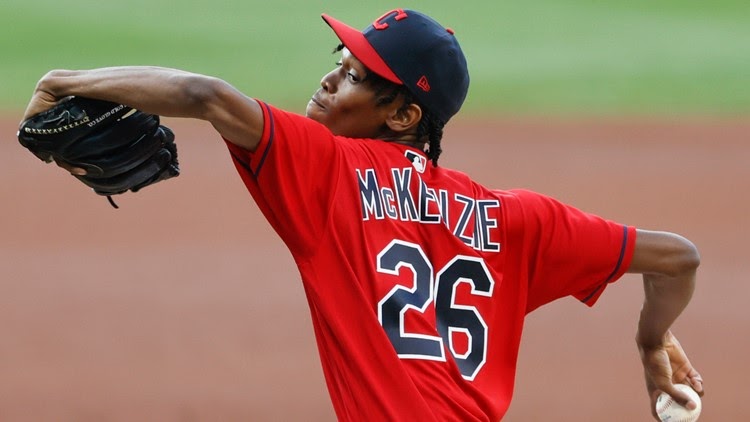 I guess I missed it but I see Will Benson played 24 games last year in the independent Constellation Energy league. Not a good result, out of 48 total batters he is in the lower half.

Batting, pitching, and fielding stats for the 2020 Constellation Energy League

Criznit said:
I guess I missed it but I see Will Benson played 24 games last year in the independent Constellation Energy league. Not a good result, out of 48 total batters he is in the lower half.

Batting, pitching, and fielding stats for the 2020 Constellation Energy League

I see that Connor Capel hit better than he did. With all our issues with outfield, it would have been nice to hit on a 1st round pick. Kind of shows you that the hit tool is sometimes more important than the fielding tool (even though he is an outfielder). You can build someone's athleticism (to a point) but if he can't pick up a curveball out of a pitcher's hand, forget about it.
You must log in or register to reply here.
Share:
Facebook Twitter Reddit Pinterest Tumblr WhatsApp Email Share Link