Man Called X said:
20 years as an active duo trumps a tag team that lasted a year. I barely remember IRS, Dibiase was the only one that had staying power.
Click to expand... 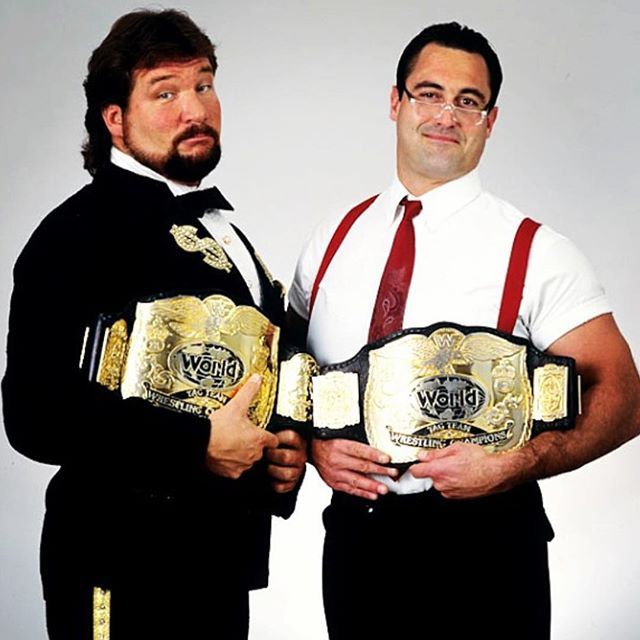 In 18 months, Money Inc. were 3x Tag Team Champs. And a more perfect pairing of personas and repertoire could never be found.

The defeated every duo sent after them, Tag-Team and otherwise. Even winning a match against Hogan and Brutus the Beefcake. Road Warriors. Crushed. Nasty Boys. Defeated time and again. Natural Disasters? Lowered to the undercard after Money Inc. was done with them. Steiner Brothers? No worries. They could outsmart them and even out-wrestle them on a technical level in a way no other tag-team could.

They were the union of two successful heels, originally managed by Jimmy Hart before he was literally tossed overboard, creating a new standard for tag-teams with members who also found success as individual wrestlers. For some reason, DiBiase and IRS were the real match made in heaven. Even though they were actually opposites as far as their gimmicks went, the real life friendship shined through and the two were the most natural pair ever. They weren't just tag-team partners, or heels in the same stable. No, they were brothers, or even closer; they were evil, money obsessed soul mates.

Individually they were formidable. Mike Rotundo/IRS was very underrated; the man is a 5x tag-team champion and the one, true Intercontinental Champion. He was both strong and surprisingly agile. And he is one of those guys that came very close to complete dominance on several occasions. He could hang with the very best, amply demonstrated when he made it to the finals in the 1991 King of the Ring, easily dispatching Jim Duggan and Bezerker, before losing a very close match to The Hitman. IRS then nearly won the Royal Rumble in 1992, lasting 28 minutes, coming in 3rd. He came super close to the IC Championship on three different occasions. He took Bret Hart and Shawn Michaels to the very limit several times and he beat Razor Ramon only to be, ironically, cheated of the belt. He took on the Undertaker and more than held his own. Despite his relatively brief time in the WWF (92-97), he had a nice career as a pretty dominant force, individually and as a tag-teamer, and has continued to be a fan favorite making a number of well-received appearances over the past 20 years.

Well, what can one say about the Million Dollar Man? DiBiase was a core member of that WWF Golden Age. He was THE heel who never reformed. Never turned Face. I was going to say he and Piper were the two greatest superstars to never win the title, but DiBiase was technically champion for five days in 1988 after Andre the Giant yielded the title to him. Little else to say about the guy. DiBiase was an all-timer already in 1992 when he and IRS joined forces (they are best friends in real life, and it was a mutual idea at the time). DiBiase is a legend.

Together they were the defining force, the ultimate duo, in the WWF between 1992-1993. All tag-team storylines, and many top card ones to boot, went through them. Money Inc. redefined what a successful tag-team could be. Prior to them, tag-teams were made up of guys who could not hang with the big names as individuals. Tag-Teams were considered the JV circuit. Sure, Superstars had combined forces before, but tag-teams consisting of individual stars were usually one-offs. They weren't teams in the conventional sense.

Money Inc. opened the door for another level of success for big names and elevated tag-teams to the top tier because it now took a super team of individual stars to defeat them.

Their combination of excellent technical wrestling, cunning, strength and over the top heelism set them up as the most powerful tag-team in the WWF's last period of dominance before major changes in the sport created multiple top-tier wresting leagues.

Money Inc. elevated tag-teams to a higher plane of competition and popularity.


Money Inc. have been beloved for decades and weren't tacky. And they had many reunions over the years including winning a Battle Royal in 2007, where IRS was the last man standing an accepted a bribe by DiBiase to eliminate himself. They are considered two of the most honored elders in the WWE. DiBiase and IRS have lasted longer as a duo than virtually all other groups, individually popular as well as a team. They inhabit a very unique space in that regard. Seeing them together, up to their old tricks is the most natural thing in the world. Despite only being around for 18 months, due to DiBiase's injuries, IRS and Ted will always be attached to the hip in the minds of wrestling fans.

The perfect slimy duo who always came out on top, whose consistent treachery and disloyalty to everyone and everything is only matched by their devotion to one another for over 30 years. Money Inc.: Friendship Incorporated. 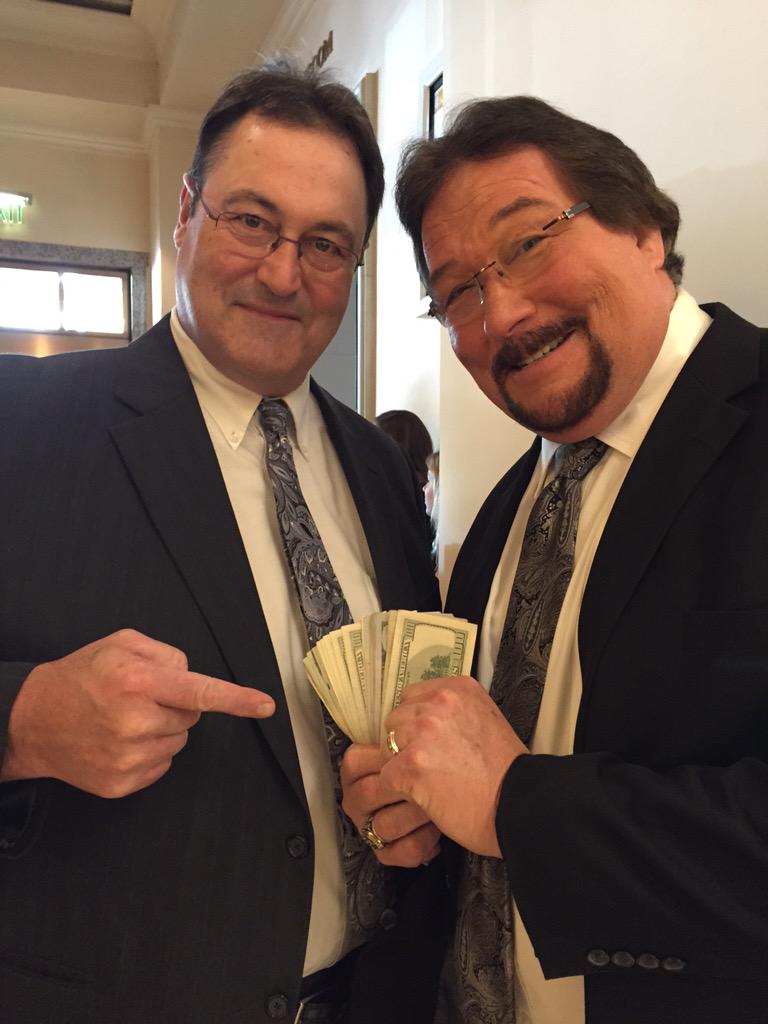 (IRS, AKA Mike Rotundo, has worked with the WWE since mid-2000s as a senior road agent).

Nicky said:
80’s was Ricky “The Dragon” Steamboat & Mr. Perfect for me.
The Attitude Era was incredible as well.
I was a huge Al Snow fan, as well as Edge and the Hardy Boys.
Click to expand...

Mr. Perfect was an excellent wrestler.

A nearly impossible combination of agility, skill and raw strength.

It is most unfortunate that injuries kept him sidelines for half of the 90s.

He could have been on the same tier as Hogan, Ultimate Warrior, Macho Man and Bret Hart.

What about the Mountie and British Bulldog?

What about the Mountie and British Bulldog?
Click to expand...

My two favorites at that time, as a small kid, was Undertaker and Jake the Snake.

And at their match at Wrestlemania Undertaker was DDT'd four times. Jake the Snake could have easily won the match several times, but he refused to pin Undertaker. Eventually, he slipped up and was tombstoned and defeated.

Like I picture them at that outside wrestlemania battling Giant Gonzalez (don’t think that was the match tho)….Fun factoid: The Giant Gonzales ring attire was @The Oi favorite outfit… Ironically enough borrowed it from @Randolphkeys

DiBiase had the best little storylines.

I loved him going around paying people off, or paying them to degrade themselves somehow and then reneging.

IRS was like the 1992 Cavs of the WWF as an individual wrestler: Damn good, more than holding his own against the biggest baddest superstars, but (barely) bested in title bouts by some all-time greats.

This match against Shawn Michaels is an example, though Michaels should have lost by count-out. He was out of the ring for like 5 minutes!


And a short clip of the classic IRS vs. Bret Hart IC title match. A near run thing for the Hit Man.*


*Insofar as it is all fake.

I just discovered that The Fiend is IRS’s son.

I actually wasn't allowed to watch pro wrestling growing up. My parents thought it was dumb hillbilly shit. My neighbors, two brothers and a sister, were allowed to watch it all the time - and they had Kool Aid! So I'd disappear over the fence every week.

Can I point out that WWF was the Transformers of pro wrestling, and WCW was the Go Bots? Here's my proof:

Just a shout out to Scott Steiner. If you could've combined his wrestling ability in his early days with his promo ability in his later days, he would've been a megastar IMO.

Here is HALF of my childhood favorite wrestlers on my wrestling shelf in the office. I have a wishlist for Funko's and I wait for my daughters to buy them for me for fathers day and holidays. 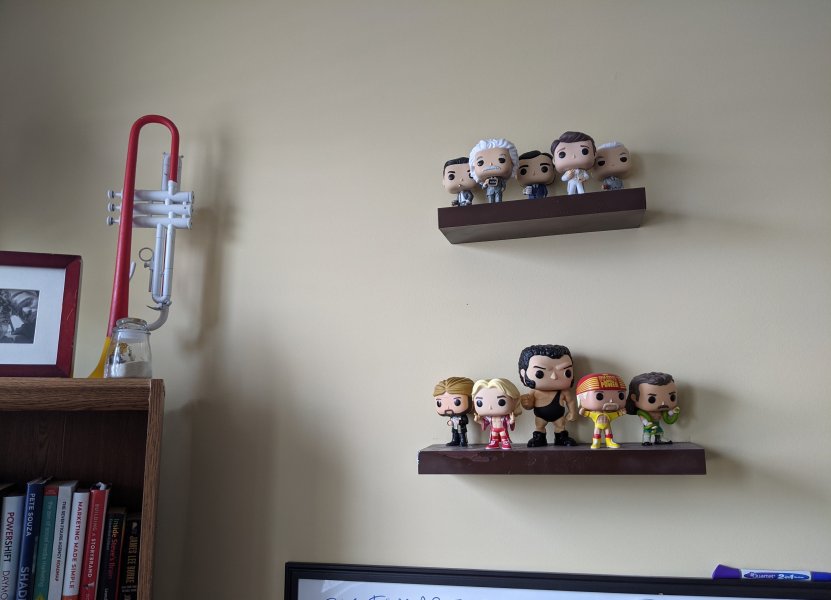 The rest of the guys not pictured yet:

Kbiz said:
Just a shout out to Scott Steiner. If you could've combined his wrestling ability in his early days with his promo ability in his later days, he would've been a megastar IMO.

There was a time when his wife and him were running a Shoney's. He did not appreciate phone calls asking if he served the Steiner recliner.

Sebastian said:
My two favorites at that time, as a small kid, was Undertaker and Jake the Snake.

And at their match at Wrestlemania Undertaker was DDT'd four times. Jake the Snake could have easily won the match several times, but he refused to pin Undertaker. Eventually, he slipped up and was tombstoned and defeated.
Click to expand...

Undertaker killed Jake the Snakes snake. I was traumatized by that. He did a pile driver on the burlap sack. Jake looked in the sack and began crying. The snakes name was Damian I think, but after that he got a new snake and just straight up named it Satan, I think.

Years later, I heard Jake say on a podcast that he accidentally killed those snakes all the time. They froze in transit etc basically because he was on drugs all the time.

Of course my favorite Jake the Snake moment was when Andre the Giant tapped out because he was deadly afraid of snakes and that was the only way he could be beaten(until Hulk did it in Wrestlemania III). Andre was always my favorite, but he was near the end by the time I watched.

Did anyone watch small wrestling conferences? I loved USWA wrestling in Memphis. It came on before WWE, but lots of guys came from there. The Rockers and Shawn Michael's most notably. Jeff Jarrett and Jerry the King Lawler were the big "stars" along with Bill Dundee.