Do Not Sell My Personal Information
B

According to a team source, the Cavaliers' plan is to have Randolph play for the G League affiliate Canton Charge.​
Click to expand...

I guess that clinches it... we're tanking for sure now.

Is this the thread where trade assets are updated? It is really stinks we don’t own our second rounders over the next few drafts, can somone post an update? Last time we were taking we complied extra ones and twos. Mr Altman has a ton of work to do!

Outgoing:
So Cavs might not have a second round pick until 2023.

Helpful guide posted by one of the Reddit Cavs posters: 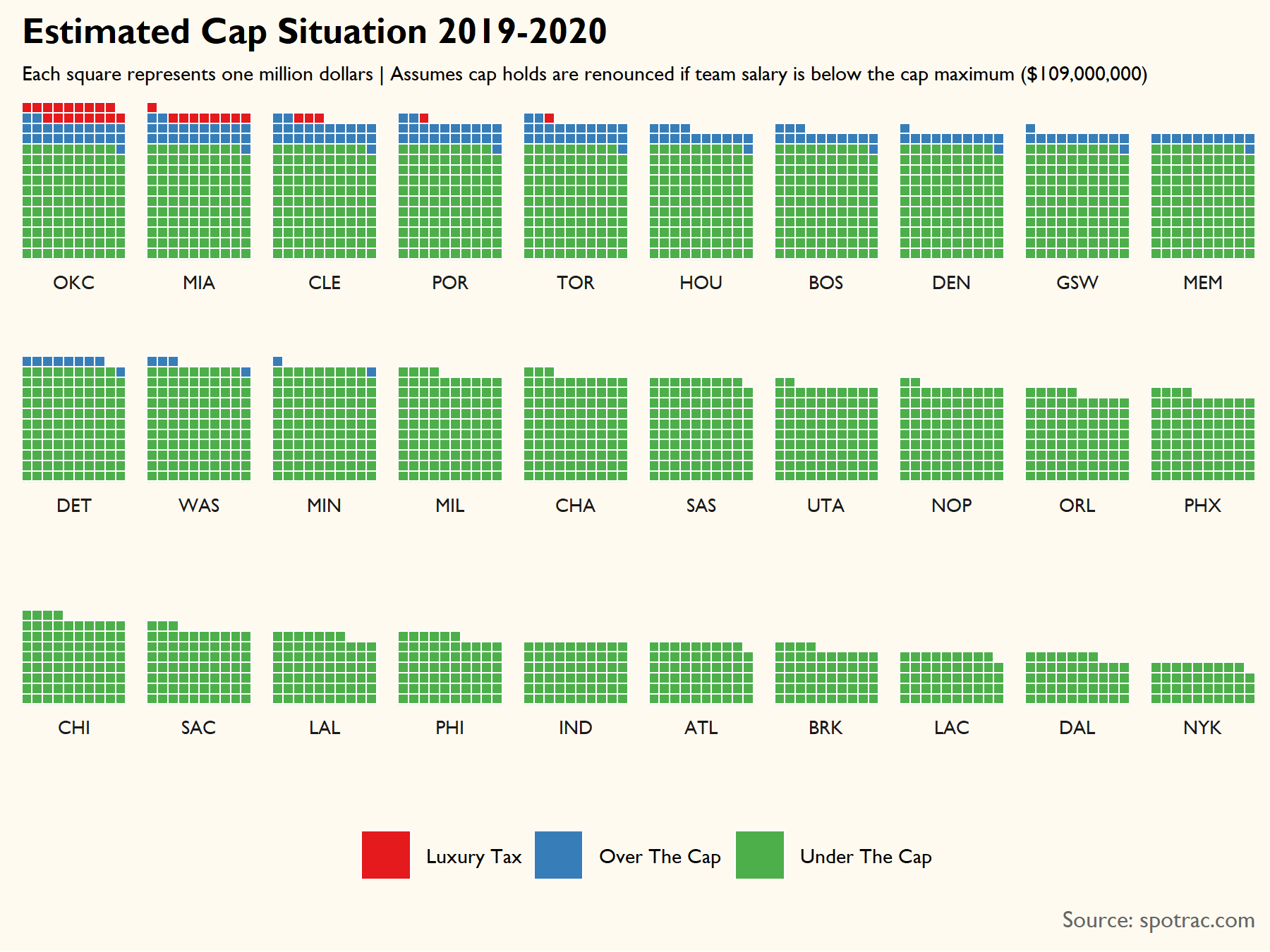 Can anyone confirm whether we, in fact, managed to squeeze under the tax line and avoid repeater penalties for this past season? I thought spotrac and overthecap had slightly different calculations.

The luxury tax total is a little different. It does not include vet minimum salary paid by the league instead of the team, and a couple other things.

For example, Channing Frye's salary counted as $2,393,887 towards the salary cap but only counted as $1,512,601 toward the luxury tax. I think they also got some savings on Stauskas.

The luxury tax total is a little different. It does not include vet minimum salary paid by the league instead of the team, and a couple other things.

For example, Channing Frye's salary counted as $2,393,887 towards the salary cap but only counted as $1,512,601 toward the luxury tax. I think they also got some savings on Stauskas.

So if I understand this correctly, a team could bring in 9 stiffs at the minimum & potentially 3 max players without paying into the tax?

It would be nice to get this updated

Ill get it updated before free agency starts

I have a question regarding JR Smith’s potential deal and rumored trade relative to the Cavs tax situation, and the time frames which are crucial and essential to understand relative to the framework of a deal getting done.

I have somewhat an understanding regarding the NBA and it’s current CBA’s outline of luxury tax which requires any NBA team to pay :

* Repeater tax offenders are charged at even a higher multiple than these.

What I don’t understand is why everything you read regarding the Cavs mulling over the pain threshold of a potential JR Smith trade comes across as so final in its final tax bill/cost due for Dan Gilbert and the Cavs to pay if such a deal does occur.

It’s no secret the cost associated with potentially taking back bad salary in a JR deal due to all the luxury tax penalties associated would come at a high cost, but if I’m not mistaken, that only would occur if the Cavs did nothing else to it’s roster or payroll until the last day of next season.

The Cavs are currently a little over 5 million over the apron, and this doesn’t include the cap holds of the most recent 3 1st round selections once they all sign.

We have read ad nauseam the Cavs must find a deal receiving enough assets and value back in return to stomach paying all these potential penalties associated with bringing back the bad salaries to match JR’s outgoing.

This end number owed would in fact be at least 3x’s the amount of the $ brought back....versus just releasing JR and saving the boat load of $ getting out of the tax apron would bring.

Which brings me to my question... every year the NBA luxury tax bill is assessed and applied on the very last day of the NBA season, usually around April 10-11.

This would mean Dan Gilbert has already received and most likely paid the Cavs 2018 bill a few months ago now already back in April 2019.

Wouldn’t any JR deal, or any scenario for that matter which causes the Cavs to go deeper in the tax only require the Cavs to owe and pay/settle this final tax bill (combining its dollar amount over the tax and penalties applied to that number over the apron ) ONLY if the Cavs roster, and in particular it’s payroll , stay the exact same for the next 9 months or until the last day of next season in April 2020?

I ask this because everything I read regarding this situation comes across as if any JR deal will cost the Cavs the guaranteed salary taken back in trade plus all the penalties once the deal is consummated...like Dan Gilbert will immediately receive the bill and owe it by the end of the month.

Once the deal is done, the Cavs are on the hook of the tax penalties associated....is the way this is presented everywhere you look.

Hypothetically let’s say the Cavs trade JR for like salary (15.8 million) and remain the same 5 million over the apron they are today, and then go over even further after signing their draft picks to let’s say 12 million over the threshold in total once all is said n done.

Won’t they have then until next April 2020 to maneuver their payroll and roster to get under that number, until the next tax bill is assessed??

With this scenario, wouldn’t they have approximately 9 months to trim 12 million off their payroll if it comes to that point today or here soon??

Between potentially moving Kevin Love, and the massive amount of expiring contracts the Cavs have on their roster next season, one would assume it should be fairly easy for the Cavs to maneuver under the apron # by next April 2020 and reduce their payroll by 12 million .

Especially if their motivation is centered on getting under the apron and reset their repeater tax penalty team status.

To me it wouldn’t make sense to make the impending tax penalties a JR deal potentially would bring TODAY if they did nothing to the roster the next 9 months a huge detriment or roadblock in making a deal, at least not as much as it would be have they not have the time they do to maneuver under where they need to be by NEXT APRIL 2020.

bigfigga12 said:
Won’t they have then until next April 2020 to maneuver their payroll and roster to get under that number, until the next tax bill is assessed??
Click to expand...

Cavs have that time to get under the luxury tax, yes, but other teams are not going to take salary from the Cavs just to help them out. If the Cavs make a move that puts them far into the tax, they want assets that are worth more than what it would cost to get them out of the tax. If they get a first round pick for going way into the tax, they don't want to go so far into the tax that they have to give up 2 first round picks to get back under the tax.

And if they get stuck over the tax, is it worth the value of the assets? Cavs were able to stay under the tax last season and spend $5mil for the #30 pick. If the Cavs end up $10 Mill into the tax, it is going to cost them 3.5x that amount. What pick is worth $35Mil ??

Also, trades are also a little tougher when you are over the tax line. Cavs have a number of vets with expiring contracts this year. They should be able to swap them for assets with a longer shelf life (draft picks, young talent) near the trade deadline as teams decide to make a playoff push. There are some scenarios where that's going to be harder to do if the Cavs are over the tax limit.
You must log in or register to reply here.
Share:
Facebook Twitter Reddit Pinterest Tumblr WhatsApp Email Share Link