weepinwillow said:
I mean, if we are getting hot and bothered by work out vids, I say we trade everything for Ben Simmons, I saw him nailing 3's on IG the other day. Shit was pure.
Click to expand...

It's different coz the guy is showing spirit and intangibles, not some kind of skill against no defense. Can't even remember a play from him on offense that was noticeable, but he was rallying people in a freaking workout.

I'm definitely a sucker for character guys. I just want to root for those who try and give their a every time.

Depends on which Barnes. Matt is probably available as an assistant coach, Harrison could probably be had for the right price too.

Lee said:
Depends on which Barnes. Matt is probably available as an assistant coach, Harrison could probably be had for the right price too.
Click to expand...

King would trade us Harrison Barnes for Love and an Unprotected pick.

Cavatt said:
King would trade us Harrison Barnes for Love and an Unprotected pick.
Click to expand...

Barnes is not worth the unprotected pick and i dont want to pay a premium to get off of Loves contract, its just money that i dont have to pay, I think we need to eat the contract, if he becomes a distraction, buy him out for very little discount, if not, just sit him and have him play 10 minutes a game off the bench.

Really interested how much broader Sexton's arms and shoulders can get lol.
2

Lee said:
Depends on which Barnes. Matt is probably available as an assistant coach, Harrison could probably be had for the right price too.
Click to expand...

Unfortunately Marvin Barnes is playing on another court.
F

2 For The Brew said:
Unfortunately Marvin Barnes is playing on another court.
Click to expand...

Pour one out for the Bad News
O

weepinwillow said:
Well, I'm not totally inclined to try and get Simmons. I think you could make the team better with him to some degree, but it likely wouldn't last long enough to be back in rebuilding mode.
My point was: Simmons is a very good NBA talent. You like Barnes more because he hasn't had the chance to be bad at things on an NBA level yet and because of the contract controls. That's fine, but it's hyperbole as being as "good at defense" as Ben Simmons, "at a minimum", would mean being top 5 in the NBA.
The likely only "untradable" guy on the Cavs in Altman's mind is likely Mobely right now. Garland is up there, but for the right player they'd pull the trigger I'd guess. Who that is? Don't know, don't think we will find out, either.
Click to expand...

I don't agree than Simmons is as you stated a good NBA talent. I consider him to be a highly overrated energy point forward with little if any skills that cannot be exposed come crunch time. He is so overpaid and the enormous amount of support he has is all coming out of his camp. I do think he could make the defense a little more reliable, but at this point you could be willing to pay a rookie like Barnes who has time to develop his shooting and if he is anything like most young players with elite work ethics he will be a better ft shooter by default over Simmons rather fast. And if he doesn't develop than you don't give him a supermax or whatever the hell SImmons contract is smh.
It is pretty unlikely btw that any team in a redraft would take Garland over Barnes and even if they did it would not have been Toronto who passed on Suggs, so the Cavs would have to add a protected first with Garland probably to get Barnes before he becomes untouchable.

2 For The Brew said:
Unfortunately Marvin Barnes is playing on another court.
Click to expand...

Terry Pluto’s book Loose Balls mentions him (and the airplane “time machine” story) and all the other wack jobs in the ABA. Before my time, but sounded like a helluva stretch.

Wait,....shouldnt that hand on a stick be a broom? 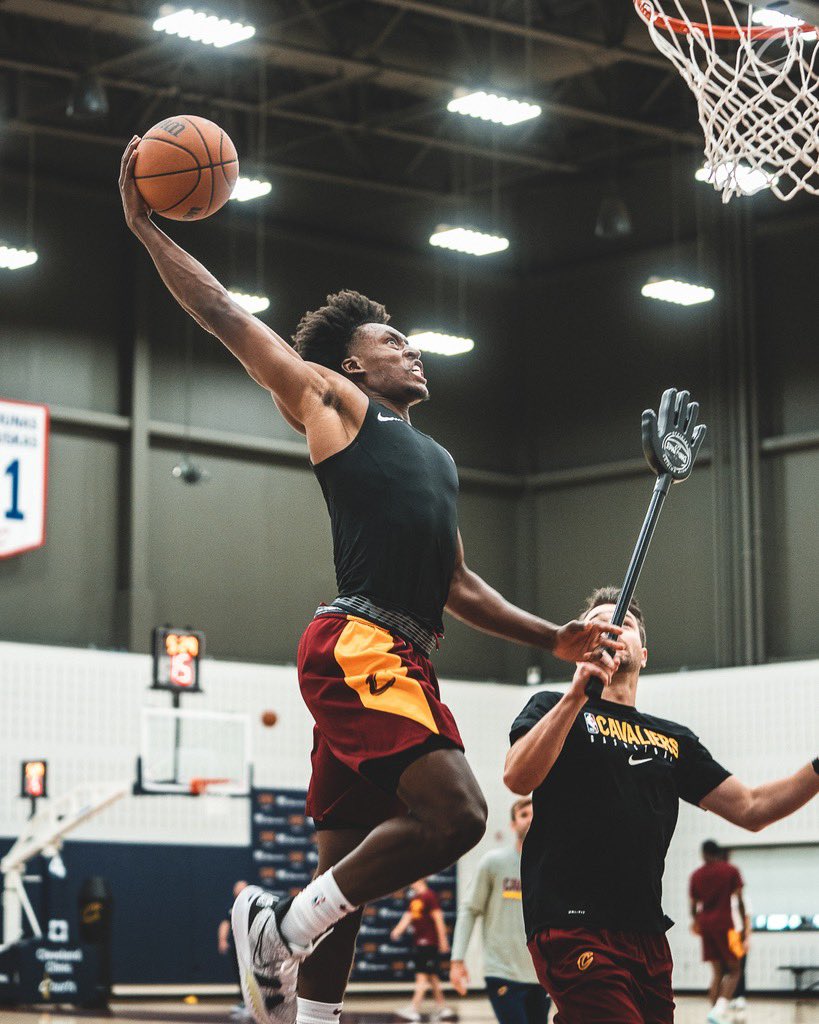