Amherstcavsfan said:
It does say something that the President of the United States called himself God, King of Israel and the Chosen One today and people barely blinked.

What kind of fucked up reality have we been dealt? Can I opt out of this universe?
Click to expand...

Can he be nailed to a cross?

Hurl Bruce said:
Can he be nailed to a cross?
Click to expand...

Amherstcavsfan said:
It does say something that the President of the United States called himself God, King of Israel and the Chosen One today and people barely blinked.

What kind of fucked up reality have we been dealt? Can I opt out of this universe?
Click to expand...

He's not the Messiah! He's a very naughty criminal and traitor!

It's like when Jaffar wanted to be a genie. You get the perks as well as the drawbacks of the title.

Soros paid for it to happen.

The only goddamn thing he has going for him is a stable economy, which he inherited and seems to be actively trying to ruin.

-Akronite- said:
The only goddamn thing he has going for him is a stable economy, which he inherited and seems to be actively trying to ruin.
Click to expand...

Which, by the way, it is starting to look increasingly likely that we are headed for a recession the year after we boot his ass out of the office...

Marcus said:
Which, by the way, it is starting to look increasingly likely that we are headed for a recession the year after we boot his ass out of the office...
Click to expand...

Yea, whoever wins the election; Trump or a Dem, is going to face a major economic event in that term.

Phills14 said:
Yea, whoever wins the election; Trump or a Dem, is going to face a major economic event in that term.
Click to expand...

I definitely agree. We will hit a recession but not sure if it is a major event. I definitely don’t see a 07/08 type of financial crunch coming up. I think everyone see the word recession and instantly thinks about 07/08. In the past most last 8-12 months, and you see an uptick in unemployment, with where unemployment is now, I don’t see it jumping to a number that effects most people.

1) Trump doesn't know how our government works, and still thinks he is a king,
2) His vast economic stupidity is trying to kill the economy.

Of course, the government is limited in what it can do to make companies move from one place to another. However, people are fooling themselves if they think he can't do it. And they are fooling themselves if they think he won't do it, and that he won't obsess over it the more people tell him no. And they are very deluded if they think he can't possibly be stupid enough to do it (there are no stupid ideas to people with NPD). There are a number of ways he could more or less compel companies to move, including the nuclear option of placing some sort of sanction scheme on China.

So while it is certainly a nice hope, to bring back all kinds of manufacturing to the US, it is a pipe dream, and forcing corporations to move back via punitive measures would undoubtedly cripple the economy of both the US and China and usher in a worldwide depression.

The major indexes also posted weekly losses for the fourth straight time. The Dow dropped about 1% this week while the S&P 500 pulled back 1.4%. The Nasdaq lost 1.8%.

Trump tweeted on Friday: "Our great American companies are hereby ordered to immediately start looking for an alternative to China, including bringing..your companies HOME and making your products in the USA." However, it is not clear how much authority the president has on this front.


https://twitter.com/i/web/status/1164914959131848705
https://twitter.com/i/web/status/1164914960046133249
"The threats have always been out there but there's been no need to provoke that," said Art Hogan, chief market strategist at National Securities. "It's almost like the administration was expecting the Fed to announce a rate cut at the Jackson Hole meeting."

Friday's decline added to a series of sharp moves down this month. The Nasdaq has now fallen at least 1% six times this month while the Dow has posted five drops of 1% or more. The S&P 500 has closed down 1% or more four times in August. Those moves come as the U.S.-China trade war intensifies while the bond market flashes a recession signal.

Trump's tweets come after China unveiled new tariffs on Chinese goods. China will implement new tariffs on another $75 billion worth of U.S. goods, including autos. The tariffs will range between 5% and 10% and will be implemented in two batches on Sept. 1 and Dec. 15. 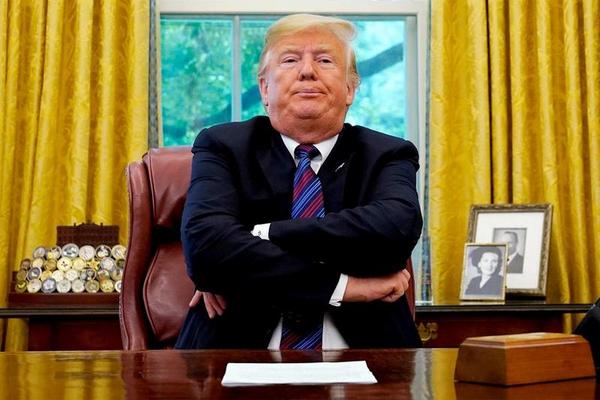 Earlier in the day, stocks teetered around the flatline after Federal Reserve Chairman Jerome Powell delivered a speech from an annual central banking symposium in Jackson Hole, Wyoming.

In it, he said the Fed will do what it can to sustain the current economic expansion. "Our challenge now is to do what monetary policy can do to sustain the expansion so that the benefits of the strong jobs market extend to more of those still left behind, and so that inflation is centered firmly around 2 percent."

He also noted there is no "rulebook" for the current U.S.-China trade war, adding that "fitting trade policy uncertainty into this framework is a new challenge."

But traders may have wanted a clearer suggestion that the Fed would cut rates in September. The market was looking for a more aggressive walk-back of his now infamous "midcycle adjustment" comment that signaled the July rate cut was just an adjustment and not the start of a trend.

Powell said in Friday's speech that "after a decade of progress toward maximum employment and price stability, the economy is close to both goals." Those comments likely didn't assuage traders hoping for an aggressive easing cycle from the Fed.

"He's walking a tightrope," said Michael Arone, chief investment strategist at State Street Global Advisors. "He's balancing so many things that no other Fed chairman has had to do in terms of a very aggressive president, markets that are demanding faster and more rate cuts, the geopolitical challenges of trade and now he has a very divided group of Fed presidents with very diverse views of where they should go next, His comments reflect that he's not going to say 'we're cutting significantly over ht next couple of months' ... he's really playing it down the middle."

The yield curve inverted briefly again on Friday, but was mostly flat throughout the day. The spread between the 10-year Treasury yield and the 2-year rate also inverted on Thursday after Fed members indicated a September rate cut was not a certainty, raising fears that the central bank would not be quick enough to save the economy from a recession. The yield curve has been a reliable recession indicator in the past.

St. Louis Fed President James Bullard told CNBC's Steve Liesman on Friday that the central bank should keep cutting rates, noting that an inverted yield curve is "not a good place to be."

These stupid nationalists who operate under the assumption that humanity's progress is a zero sum game are incredibly frustrating.

Trump knows more about the Bible than he does about tariffs.

"Mr. President? Why are you so full of shit?"