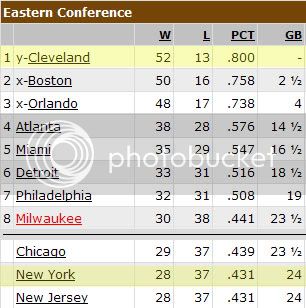 The Cavaliers are tripling their pleasure behind the arc.

They not only have the best three-point defense in the NBA, they have overtaken the San Antonio Spurs and Orlando Magic as the most accurate three-point shooting team in the league.

The biggest reason for their resurgence from the three-point line is they have three players ranked in the top 40 in three-point percentage. Guard Mo Williams is ninth at 43.8 percent, backcourt mate Delonte West is 25th at 41.4 percent and top reserve Wally Szczerbiak is 40th at 40.4 percent.

It’s quite an accomplishment since the Cavs’ primary three-point shooter from last year, guard Daniel Gibson, has slumped to 36.4 percent from behind the arc. Another player who shoots a high volume of threes, forward LeBron James, has dipped to 33 percent.

They are tied with Boston for first at 39.1 percent as a team from three-point land.

“We have a lot of guys who can put the ball in the basket,” Szczerbiak said. “That was (Cavs general manager Danny Ferry’s) plan to surround LeBron with good three-point shooters, some good overall shooting and pretty much good players all the way around.

“We do have a lot of guys shooting over 40 percent from (three-point range). That’s probably one of the reasons (why we’re leading the league).”

Another player, guard/forward Sasha Pavlovic, would be among the league leaders if he had enough attempts. He’s shooting 46 percent, not to mention center Zydrunas Ilgauskas, who is shooting 40.6 percent.

It all adds up to the best unit in the NBA.

“I’ll take that any time,” Cavs coach Mike Brown said. “We have some good shooters on this team. We have guys that know how to pass the ball. We’ve done a nice job of trying to reverse the ball. We’re setting screens to help out our teammates. It’s great to knock down the looks that we’ve gotten at the three-point line.”

CAVALIERS 126, KINGS 123 (OT): Cavs forward LeBron James didn’t get a triple-double. He had to settle for a mere 51 points instead.

He added nine assists and four rebounds. He was 16 of 30 from the field en route to his third 50-point game of the season.

The Cavs (52-13) earned their first Central Division title since the 1975-76 season, and second in franchise history.

James had 22 points in the fourth quarter and overtime periods.

Forward/center Anderson Varejao added 18 points and 12 rebounds for the Cavs, while Wally Szczerbiak had 12 points and six rebounds.

The Cavs have won four in a row and eight of their last nine.

James split two free throws with 23 seconds left, which knotted the score at 116 apiece. Kings guard Kevin Martin, who had a team-high 34 points, missed a shot at the end of regulation.

Cavs coach Mike Brown was ejected with 8:15 left in the second quarter. He earned three technical fouls in the last two games.

Assistant coach John Kuester took over on the hot seat after Brown’s second ejection of the season.

The Kings are now 0-25 against the Eastern Conference this season.

The Cavs have won six in a row over the Kings, and are 22-4 against the Western Conference this season.

• The Cavaliers lead the Central Division race by 18.5 games, and join this year’s Lakers (18-game lead in the Pacific Division) as the only teams to have a lead of at least 17 games in their division this late in the season since the 1995-96 Chicago Bulls.

Quote To Note: “Our mindset is still the same going on the road. I do think we do have a better team (this year). That has something to do with it. I’m also a better coach than I was. It’s not anything different from last year or the year before. Any time you can get a record, it’s great. It’s a nice honor.”—Cavs coach Mike Brown, on setting the franchise record for road wins with 23.

• F LeBron James is tied with Hornets G Chris Paul with six triple-doubles this season. James became just the 12th player in history to record three triple-doubles in a row (Jason Kidd and Grant Hill are the only active players). The last player to register four consecutive triple-doubles was Bulls guard Michael Jordan, who had seven in a row, in March and April, 1989.

• G Delonte West (bruised back) was held out of the Kings game. G Sasha Pavlovic, who had 16 points against the Suns, started at shooting guard.
Click to expand...

WITH TICKETS PROVIDED BY 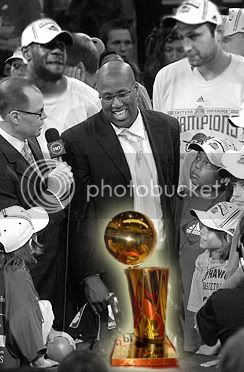 Hustling on the inside

Sweet preview. Love that flickering Q among many other things.

Knicks have been playing well recently, going 3-1 on their current road trip and including an OT win against Detroit). But losing Duhon is a blow. Nate Robinson started for Duhon on Friday night.

But considering this is the first game off a long road-trip, a Sunday game (with the Cavs flying home on Saturday), a game against a team the Cavs have beaten a few times, a team with a starter down that might be taken lightly, an opponent that plays up-tempo against a Cavs defense that has been challenged, a game just before facing a major rival against Orlando, I would also call the Knicks game a potential

Go Cavs. Could really use a blowout win and some rest for the starters.

This deserves Game Thread of the Year.

Your job is to Attack

Oh, and the word "Cavaliers" shifting from the wine to the yellow color reminds me of a Christmas tree light bulb.
Last edited: Mar 14, 2009

Cavs really need to work on playing strong defense, and this is our best opportunity to do it. I want to see the Cavs have a few games in a row where they hold teams under 90. I'm sure Mike Brown feels quite the same.

The good thing about the Knicks is that they will not do a damn thing down low against us, where we've been having our greatest defensive problems. The Knicks live and die by the outside shot, and if we can play strong perimeter defense we can humiliate them like earlier in the season. Speaking of strong perimeter defense, is there ANY chance we'll see Kinsey now that Delonte is out again? Dude deserves some run and I'm absolutely sick of seeing Boobie out there.

Gotta get our studs some rest, DEFINITELY need to rest LeBron. We also need to get the young guys some real minutes. I want to see JJ out there in the 4th.

Playing 3 teams in a row that consist of shooting the ball in the first 8 seconds of the shot clock, poor defense, and blowing leads.

Hopefully the Cavaliers don't get too used to this type of basketball...
D

Best game thread ever, i officially retire. I cannot keep up with Splitz, he officially killed everybody........
M

I love the setup Split, but since when did Joe Smith wear the #7 for the Cavs? You know better.

Thanks a lot a-hole, I'm prone to epileptic seizures. Let's add some more lights and animation, shall we?

Thanks guys, the design was actually for a wallpaper that I was making but it ended up evolving into a game thread. I see some mistakes I made in the Knicks animated gif that I need to fix. I was going to add some booty to the mix but our Cheerleaders don't impress me much and Randolph pretty much set the bar too high with those 4 girls bent over in g-strings. I still haven't recovered from that one.

xsabre420 said:
I love the setup Split, but since when did Joe Smith wear the #7 for the Cavs? You know better.
Click to expand...

Yeah, what the hell? I don't really even have an explanation for how that happened. I will change it.