Sir'Dom Pointer said:
Lmao...
It's not rigged against the Cavs like you keep bringing up. It's rigged towards certain teams and Vegas favorites depending on the match up. You just rig it against the teams that can get fucked without anyone batting an eye. And the cavs unfortunately, like some other teams with similar traits are a target for the refs and means for other contending teams to reach their destination.

Refs started the season rather strong allowing more contact and trying to establish a baseline to how everyone should be officiated, but they have reverted back or even worse, decided to ref teams differently based on certain preferences and motives. One team or player is reffed by the old rules and one by the new ones... you have no way of challenging anything as it is due to personal interpretation.

I'll say it Rich, you have to be super naive at your age to think a major corporation like NBA that is so involved with direct and 3rd party betting from all over the world to not be dirty and corrupt to a certain extent. Especially that it has proven true when betting was much less prevalent. Wake up Rich, you live in America. I shouldn't be the one telling you that.
Click to expand...

Imagine thinking this and supporting the product anyway and then calling someone else naive.

Rich said:
Imagine thinking this and supporting the product anyway and then calling someone else naive.

Sir'Dom Pointer said:
You are naive. And that has nothing to do with my Fandom. Im not supporting the product, I'm supporting the team.
Lordy
Click to expand...

There's no difference at all.

Shit is rigged in this matrix.

Somehow I keep waking up here in a new body which I've probably done about 10,000 times at this point. I also keep following these sports teams. What does that say about me?
2

Coyote said:
I, for one, salute your drunk post, sir. Could have done without knowing how "horned up" you are, but the possum comment made up for it.
Click to expand...

Au contraire, the “69 percent horned up” was the best part of the greatest sports post in the history of the internet.

Rich said:
Imagine thinking this and supporting the product anyway and then calling someone else naive.

#2 if you take a totally logical approach to fandom even if the product was unbiased you wouldn't consume it. Basketball is ultimately meaningless and has no relationship to your life.

Just extend your so-called analysis to it's conclusion and rooting for a team makes no sense at all, especially when it is based on geography and the fan has no connection to the team besides a player who doesn't even play for them anymore.

Concluding fandom, an exercise is fantasy, is some kind of normal consumer choice as if there is a better place to see the best athletes in the world is prob more ridiculous than thinking the best teams get extra help.

narbar32 said:
Every time we play one of these top 5-10 down to the wire and I come in here and read about how that team just basically "coasted" and "toyed" with us for 3 quarters without a care in the world before cranking it up in the 4th without ever feeling in danger, I get so mad I just want to dance!
Click to expand...

Yes! Angry and drunk Kevin Beacon in the barn dancing!

I just don't understand this.

The only thing I do is root for this team during the bad times and the good. A lot of the time I don't even enjoy it...I just do it cause there is this burning desire to watch a game. It's not a rationale thing to do. I hurt my quality of life by doing so. staying a wake till 4am to watch a basketball game that I have no one to talk to after whether we win or lose other than people on this site cause people around here don't give a shit about the Cavs or the NBA is not a rationale thing to do, and yet I do it anyway.

My life choices and the decisions I make are not rationale regardless of what I believe in. I do what I do because it is what I feel in any given time, but I will still speak my heart on the subject whether I consume it or not, and I will criticize everything if that is what I believe in. How does that make me a hypocrite?

I was the highest I’ve ever been in my life off an edible. But man watching the game the refs seemed absolutely horrible.

All4One1ForAll said:
I was the highest I’ve ever been in my life off an edible. But man watching the game the refs seemed absolutely horrible.
Click to expand...

There was one particular ref I will be watching out for. Mother fucker.
K

From the Suns reporter:

The Suns proved that once again in outlasting Cleveland, 120-115, to extend their winning streak to 14 in a row before 18,055 fans Wednesday night at Rocket Mortgage FieldHouse.

As Monty Williams says, they don't have to explain how they win, but the Suns (15-3) once again nearly blew a late lead as they were up 10 with under seven minutes to go in the game before the Cavaliers (9-10) got within one with 11.6 seconds left.

In extending the NBA's longest current win streak, Phoenix utilized the foul strategy to prevent giving up a 3 attempt, got a leakout bucket and blocked shot from Mikal Bridges and Chris Paul started closing out the game by drawing a sixth foul on Darius Garland on a rip move with 1:14 left, with Phoenix up a deuce.

Oh the rip move. Think it's going to be added to the non-basketball moves next season.

Here are five takeaways from Wednesday's win ahead of the Suns flight to New York to play the Knicks on Friday and Nets on Saturday to complete a four-game road trip.

1. The Suns made timely plays in edging Cleveland to sweep the season series.

Suns 115, Cavs 109 (50.1 seconds left) Jae Crowder dug out a rebound among a group of Cavs and was fouled. Crowder made both free throws.

Those are called winning plays, too, and that's a big reason why the Suns haven't lost in nearly a month. 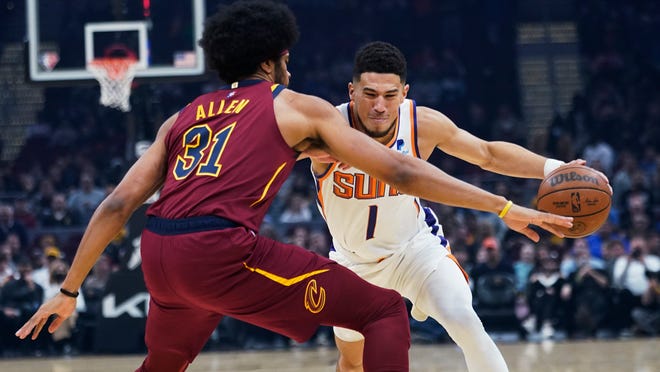 He's such a good guy, but Ricky Rubio will have nightmares about this one.

The Cavs pulled within a point with 11.9 seconds left with a Lauri Markkanen putback after Rubio, who replaced Garland, and Osman missed 3s.

So after Paul pushed the lead back to 3 on two free throws, Williams elected to foul the Cavs so they couldn't get off 3s.

Cleveland only shot 30.8% from deep, but Osman hit a big one and had another 3 wiped out due to a foul called on JaVale McGee before the shot.

This will be revisited in the fifth and final takeaway. 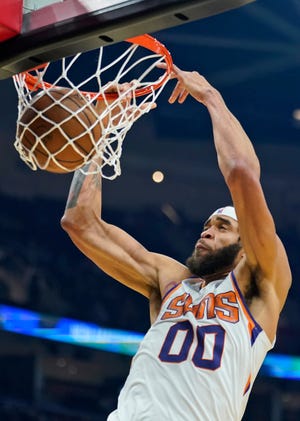 The crazy part about it all is Bridges fouled his former teammate, Rubio, twice.

What's even crazier is had Garland not fouled out, Rubio may have never checked back into the game.

Still, Rubio has been clutch before, but not this time.

Then after Booker split two free throws to make the difference three again, Rubio went to the line and missed the first with 4.6 seconds.

That led to him missing the second on purpose, but he didn't even draw iron.

Paul was then fouled on the inbound pass and made two to secure the win.

3. That was the play-by-play and breakdown

Now here's a history lesson to help further explain what happened at the end.

Crowder established himself in his first year in Phoenix last season as the person to throw the inbounds pass, especially in clutch situations.

He'll have that job in Phoenix for life after finding Deandre Ayton for that dramatic game winning lob to stun the Clippers in Game 2 of the Western Conference finals.

So Crowder made all the inbound passes down the stretch Wednesday night.

Then Paul and Booker wanted to take the late free throws. It's what they've done their entire careers.

Booker missed a big one with 5.3 seconds left, but made the second one to put Phoenix up three again. Since the Suns decided to play the foul game, that make was huge, but remember he misfired from the line late in that 99-96 win at Minnesota.

Still, he lives for those moments, is usually money and beats himself those rare times he comes up short.

4. Before the game, Williams talked about how the Suns gave up 67 points in the second half of Monday's four-point road win over the Spurs on the second of a back-to-back.

So you know this was discussed at length going into Wednesday's game.

Then the Suns allowed 66 in the first half against Cleveland, which didn't have rookie Evan Mobley or second-leading scorer Collin Sexton.

The Suns have improved defensively as evidence of their rise to third in defensive rating, but didn't have it in the first half.

Phoenix did respond though with giving up just 49 points in the second half with 20 coming in that third quarter.

5. The Suns showed how fouling can be a good thing.

Paul and McGee both picked up fouls that wiped out 3-point hits by the Cavs in the second half.

Not saying that would've made a difference, but the Cavs did lose by five points.

Not a mathematician, but two 3s equals six points.

First Paul fouled Allen, who was setting the screen, before Garland hit a 3. 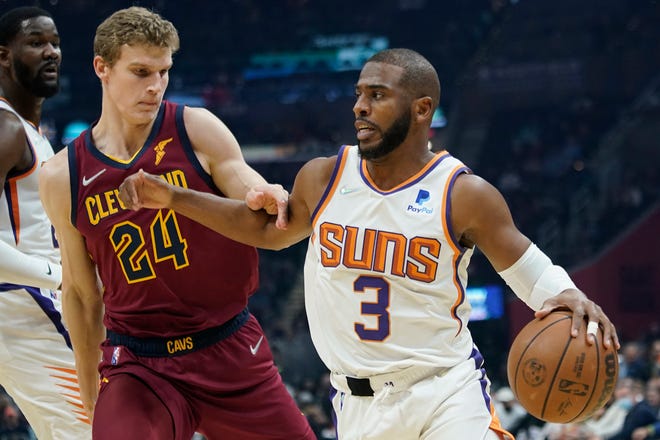 McGee fouled Allen in the backcourt before Osman hit a transition 3 that would've made the difference two with five minutes left in the game.

The backup big posted a double-double of 13 points and 12 boards, he filled in nicely with Deandre Ayton having foul trouble, but that foul late may have been his biggest play of the night.

Then the Suns played the foul game at the end.

The issue with fans blaming the refs isn't that they miss the bad calls against their team, its they never, ever acknowlesge the good ones in their favor.

If you truly think the league is rigged against the Cavs, and you appear to, then what in the world are you doing watching and supporting?
Click to expand...

Right because it's not any NBA refs have ever come out to say the NBA puts pressure on them to favor certain teams... No. Never.
B

daytripper said:
Shit is rigged in this matrix.

Somehow I keep waking up here in a new body which I've probably done about 10,000 times at this point. I also keep following these sports teams. What does that say about me?
Click to expand...

How naive are you, to keep supporting all this riggery by continuing to wake up?
K

The refs do seem to have a knack for making questionable calls against
the non-elite teams/players at critical junctures that stop or change
the momentum of the game.

Amazing how quickly fans turn on players based on an off performance during
a game in November.