How do you cook it?

Bump with an article that made me laugh:

The differences between what happens at a black BBQ is different than at non-black BBQs, but, let’s be honest, you probably already know that. The differences are not obvious. They can be very nuanced and even intimidating to newcomers. Words are spoken with vigor, opinions tossed around as fact and lines in the sand draw*n. While these notions aren’t scientific, they definitely pass the eyeball test. If you’ve been to few (dozen...hundred?) then you know it’s true. To help bridge the gap for the uninitiated, we’ve come up with a small list of things and moments that will make your experience much smoother.

A Grill Master: At one point, you might have three or four different kinds of meat on the grill at the same time -- maybe even a vegetable. That takes dexterity. Not to mention the fire (and guests) might be acting finicky.

A Dope Playlist: The most difficult playlist to compile is one for a mixed-generation crowd. Finding a way to segue from Sam Cooke, to Frankie Beverly and Maze, to New Edition, to Jay-Z, to Kanye is a tough gig. But it can be done.

A Micro Manager: If you’ve ever been tasked as the grill master, you know the supreme annoyance of the clown that looks over your shoulder or the host with a stopwatch. But you know no BBQ will pass without meddling.


A Good Marinade: You can’t just throw some barbecue sauce on your chicken and expect for that to pass the taste-tests.

Drunk Uncle/Friend: Who has time for a BBQ where everyone drinks in moderation? That’s a snoozefest.


The Girl With The Skimpy Outfit: Invariably, there are always a couple of non-sanctioned folks at a BBQ. In the email invite, you told your peoples to “bring who you want,” so it’s not like you can complain. Still, when your homegirl brings a woman (let’s be specific: a fine woman) wearing what basically can double for a bikini, the coupled up men and women end up having a stress-filled day. Dudes wanna look but they know they can’t. The women start asking you, “do you know her” and “what is she wearing” until the woman hears them. Also, if you are on the grill, she’s all over you, trying to get a quality plate.

Cheap People: The people who only bring plastic utensils are not fan favorites. In fact, they will get screamed on and clowned. No country for that cheap foolishness.

A Good and Bad Potato Salad: Depending on the size of the ’Cue, you need multiple folks handling multiple “sides.” Come dusk, there will always be that one aluminum pan of ’tata salad sitting on the table, warm, messed-over and lonely because the chef tried to get too inventive (no one asked you to throw in a bunch of fresh rosemary) or decided it was their responsibility to be everyone’s nutritionist (olive oil is not mayo/Miracle Whip and use some salt, dweeb). It’s a staple.

Too Much Ice: There’s no such thing as “just enough” ice. And there’s definitely such a thing as “You gotta drink that Bacardi and Coke warm, fam.” You need a surplus of ice, even if it’s just for peace of mind. Plus, who doesn’t love the sound of that ice/water-slush being emptied out of the cooler?


The Conversationalist and The Contrarian: There’s always one or several folks at the BBQ that have the ability to get a spirited conversation going. The conversationalists use their being well-read, their knack for asking controversial questions, and their curiosity to keep folks talking. Contrarians push buttons, hurl wild opinions and entertain. Both are essential.


Non-Pork Eaters: They always ask you to use different utensils when handling meat, using buzzkill words like “cross-contamination.” Worse, they complain about how bad cooked-pork smells. Hard to knock their hustle, though, since they do have a point.

Non-Meat Eaters: At some point, one of your friends will bust out a veggie burger or make a plate with just squash and zucchini kebabs. In less than two minutes, someone will ask, “What, you a vegetarian?” People get nervous when you don’t eat meat around them. It’s like they think you’re judging them or something. In those situations, just tell them that your doctor told you to cut back; even if it’s a lie. It makes people feel comfortable. If that doesn’t work, tell them too much cholesterol messes with their erections. Then sit back, have a glass of lemonade and snicker to yourself.

People Arguing On The Merits Of Gas Grills Vs. Charcoal Grills: Park BBQs are almost always charcoal-based, while some home BBQs tend to be gas. Everybody likes charcoal, but there’s always that one dude, who just spent a grip on a gas grill, who’s trying to convince you that you’re missing out by relying on briquettes. It’s important to teach him a lesson and always give him small plates of food. Tell him there is extra salad if he wants it.

Salads That Never Gets Eaten: Theoretically, we all wanna eat healthy. We wanna balance the wings and the macaroni salad (elbow mac only; we don’t do shapes, homie) with some greenery. But, um...Yeah, no. Somebody always brings a garden salad and they go home with 75 percent of it uneaten. If you do bring a salad, you gotta come harder than iceberg lettuce and cucumbers. Bring some arugula, some olives. Throw an avocado in that joint or something. It’s 2013; we need you to do better!


Annoying Family Members: There are always a few relatives who act like someone held a gun to their heads to get them to attend. They travel hundreds of miles to constantly talk about missing work, all the things they have to do back home, and how much the trip o.t. cost them. Most of the BBQ is spent sitting off to the side texting people, sipping wine and looking at people sideways like they're strangers.


Kids: There's always a bad ass eight- year old niece or nephew that is purely a magnet for destruction, mischief and disrespect, and the parents are too busy drinking vodka to give a damn. By the end of the BBQ the kid has knocked over the grill, set fire to his baby cousin’s blanket and peed in the water cooler.

Take-Home Plates: We cannot abide by a BBQ that runs out of food.

Great dinner last night. Mexican theme throughout. All fresh veggies and herbs and a nice semi-hot spice rub. Marinated and skewered shrimp and chicken kabobs with homemade Spanish rice. Fantastic. Boobs were the spiciest of all! 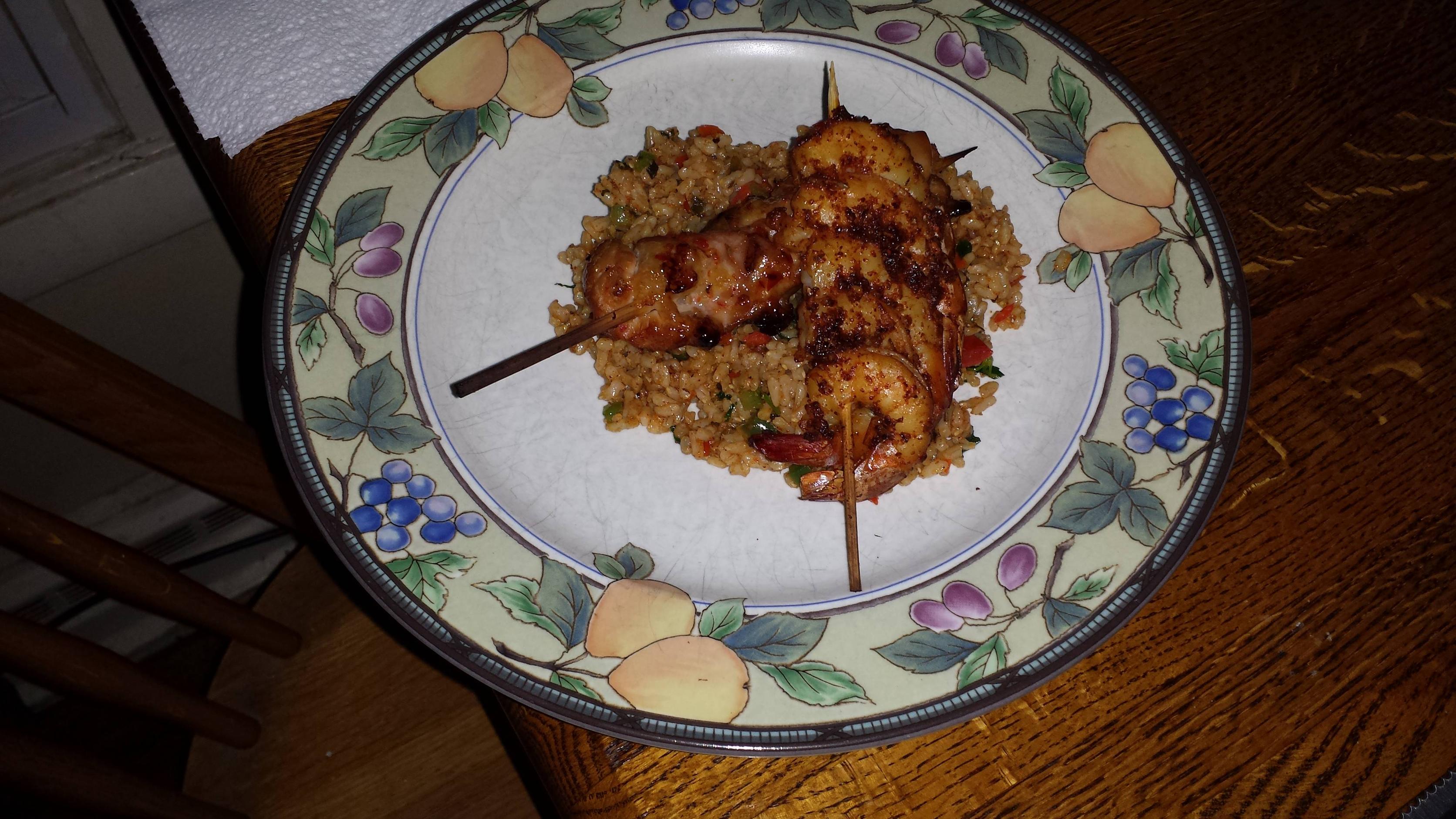 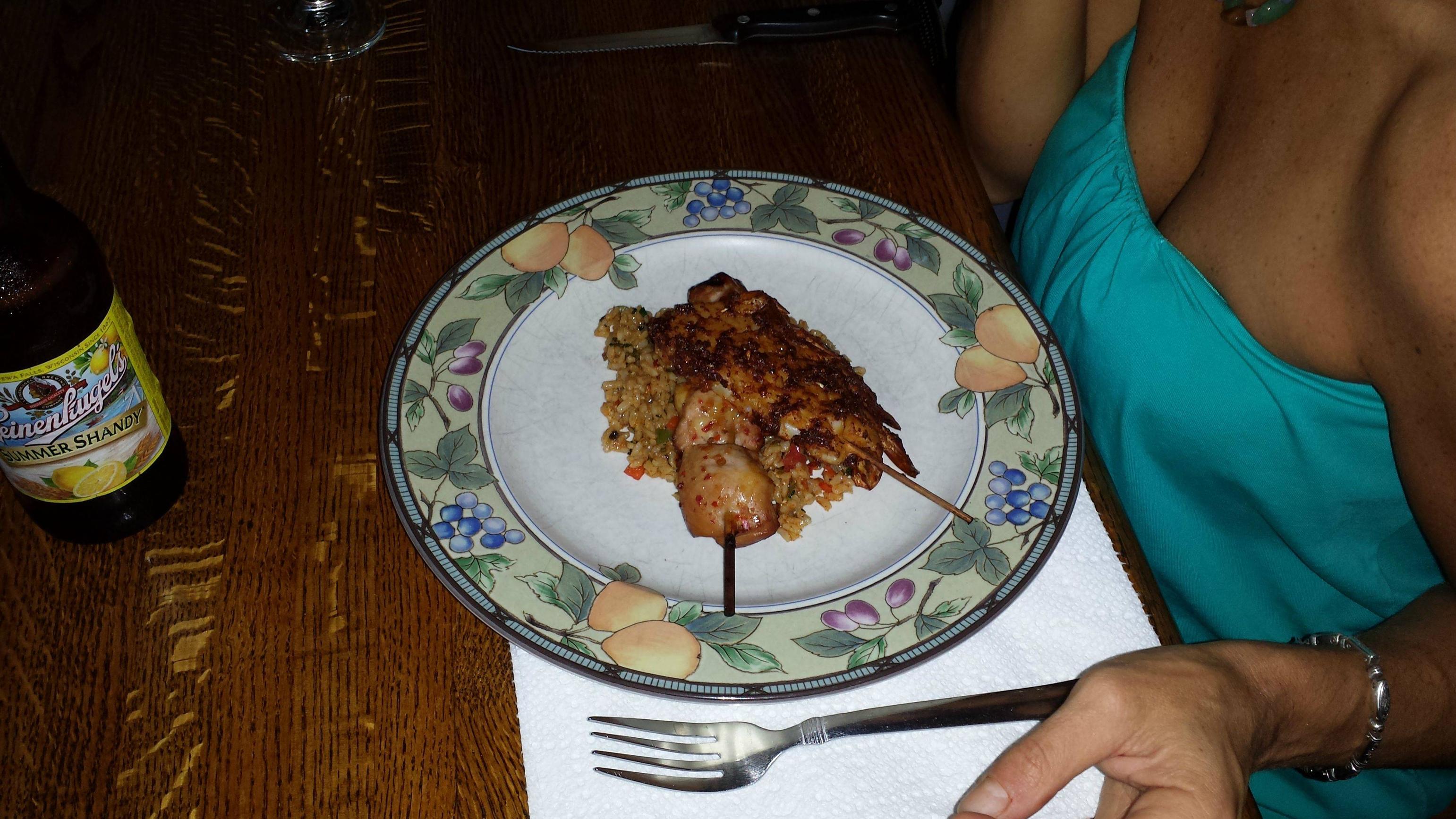 WOW...I cant stop staring...at that dirt under your left thumbnail.

Oh. Her thumb got in the pic? Nice spot, Max. I won't ask her how it got dirty.

I was just thinking about this thread as I eat my wife's leftover chicken cacciatore. She made it with drumsticks because, you know, nothing improves spaghetti like gristle and cartilage. I really need my arm to heal so I can take the kitchen back. This has been a real struggle over here.

Man up, Keys, and get that damn apron back on already!

I don't see a full thumbnail anywhere. I do see Leinenkugel though, which is fucking awesome.

Randolphkeys said:
The Conversationalist and The Contrarian: There’s always one or several folks at the BBQ that have the ability to get a spirited conversation going. The conversationalists use their being well-read, their knack for asking controversial questions, and their curiosity to keep folks talking. Contrarians push buttons, hurl wild opinions and entertain. Both are essential.
Click to expand...


Decided to make a different kind of chocolate chip cookie. This one calls for both bread and cake flour, and the dough must be chilled for 24 hours before baking. It also calls for Bittersweet chocolate that's at least 60% Cacao.
I used 1 1/4pounds of chocolate in this.

Very rich cookies. At best, one is good enough and I thought I could easily eat 3.

If I ever make these again, I will also add in milk chocolate to add an additional flavor. Also, sea salt is sprinkled on top of these before baking. Gives the cookie a salty/sweet aspect. Very good, but in moderation.
J

Its looks delicious will someday grab the whole plate

Randolphkeys said:
I was just thinking about this thread as I eat my wife's leftover chicken cacciatore. She made it with drumsticks because, you know, nothing improves spaghetti like gristle and cartilage. I really need my arm to heal so I can take the kitchen back. This has been a real struggle over here.
Click to expand...

Decided to do something for the Breaking Bad finale. Went with a dessert that I've never made before-- a Blondie, for Walter White. I topped it off with vanilla ice cream and a Maple butter sauce.


The sauce was probably the best part of the entire dessert. It was made with whipping cream, sugar, sour cream, and maple syrup. The final product was a bit messy and didn't come out picture perfect. I did not use Macadamia nuts in this recipe, which I should have. I just made the blondie with white chocolate and nothing more. So, it missed the additional flavor. Also, I should have used French Vanilla ice cream instead of a creamy vanilla. Pecans on top because I'm not too fond of Walnuts.

It turned out decent, but it's nothing spectacular. The presentation of this made me sad.


Trying to decide between this beauty or this one... thoughts?

Brinkmann looks like its got more real estate which is always welcome...I love my Weber...that said I don't know anything else.