DJTJ said:
Everyone shitting on the Trop is wrong. It’s charmingly horrible.

Chase blows. It feels so wrong watching baseball, and when the dome is closed, the fake light is really off. It’s like the field becomes gray.

PNC and Petco are amazing and as advertised.

I went to a old Comerica as a kid and just remember it was bad.
Click to expand...

Shea stadium was my favorite (before they built Citi behind it)… Coldest park I’ve been to as well with that open centerfield air. Saw a 2000 World Series game there

Old Yankees Stadium was great. The atmosphere during their run was unmatched (maybe other than Oakland).. Saw some playoff games there and a couple World Series games.. They tried to replicate it slightly with the new park but it doesn’t hold a candle to what they tore down…

Fenway was okay. I actually enjoyed the pregame tour I did there over the game itself…

I really enjoyed the multipurpose/dome stadiums a lot…Fulton County, Three Rivers, Astrodome were great… Saw a 1998 Astros game in the dome when Randy Johnson was pitching against Kevin Brown of the Padres and that was fun…

Best crowds however I remember was a playoff Oakland A’s game in the early 2000’s (might be the best overall atmosphere I’ve ever been to)…. Team was stacked as well…

I know it stings… But the best crowd I’ve ever seen in a game was in 1997 at pro player stadium…. They opened up that entire stadium and it was so loud when it was filled to capacity… With the strong Latin influence it was just a whole different vibe… Obviously nobody turns out for Marlins games now and that new park is trash…. But that old football stadium during their 97 & 03 runs was so underrated from a home field advantage standpoint….

Lee said:
There are atleast 4 or 5 spring training fields i like better than Chase
Click to expand...

There are some fantastic spring training stadiums for sure.. Our own Goodyear Ballpark is an excellent one.

Criznit said:
There are some fantastic spring training stadiums for sure.. Our own Goodyear Ballpark is an excellent one.
Click to expand...

Diamond back/Rockies is the best, I hear the AZ Wrigley is pretty awesome, but never been...but Goodyear is nice too

Lee said:
Diamond back/Rockies is the best, I hear the AZ Wrigley is pretty awesome, but never been...but Goodyear is nice too
Click to expand...

Do the Angel's/A's share a stadium? I remember one of those being really nice and having a nice park/hike nearby.

Criznit said:
Do the Angel's/A's share a stadium? I remember one of those being really nice and having a nice park/hike nearby.
Click to expand...

No, Angels is older and in Tempe, A;s is newer, havent been to it yet, suppsoed to be very nice

MLB parks I have visited and my impressions.

Been to Fenway 3 times: '68, '78, '88. Say what you will about the Massholes, they speak with one voice at their game.
Old Tiger Stadium was a great atmosphere too.
Three Rivers and Riverfront? Typical plastic 70's venues. Blechh.

Of course my perspective is clouded by hundreds of games at the Gray Lady by the Lake. Love ya, Cleveland Municipal Stadium.

Off the top of my head -

PNC Park - Like others have said this place is top of the mark. Absolutely perfect view across the river and not a bad seat anywhere. I've been there several times. "Best" story I have, I went in college and bought my buddy who was 19ish a beer and I had some popcorn in my hands (not sure why I didn't have a beer as well). He gets stopped by a cop who asks for his ID and he completely froze. Without missing a beat I said he was carrying it for me so I could eat my popcorn. Quickest lie I've ever come up with. The cop bought it, asked for my ID and off we went.

Progressive Field - Even if it werent for the decades of memories here, this place will always been near the top. Unfortunately, the shipping container renovation was way off base and ruined what was otherwise a great update to the stadium. Im really looking forward to see how they fix that in the future.

Wrigley Field - The stadium, seats, field, etc.. aren't all that great, but yea the surrounding area and the history make it a must visit. I got the absolute worst sun burn of my life (we're talking ooze seeping out of my face bad) from sitting in the bleachers here. Would do again.

Municipal Stadium - These are my first memories of baseball. Seeing the giant Chief Wahoo sign as you walk in is a vision I'll never forget. Also I remember it was always so empty that they had an animation up on the scoreboard encouraging you to bang the two empty wooden seats next to you up and down to make noise. And bathroom smell? Yikes, the troughs in the mens room were a complete nightmare for little kid me. You would stand there waist high next to a bunch of drunk men all packed around a trough and their piss just sploshing all over you. Vile.

Old Yankee Stadium - Sorry Pip, I hated it. Only got to visit once, also in college. I sat in the upper deck. Man, the smell was awful, like burnt rubber in the entire area. The speaker system was pretty much non-existent, like did they only have one speaker located somewhere in center field? I swear I saw a rat running out from under a hole in a door in the concourse. If it werent for the history and being in NYC, this place would be the absolute bottom.

Great American Ballpark - This stadium was a pretty massive miss. With the riverfront in front of them and the downtown Cincy buildings behind them you would have thought they could have found a much better way to feature either view. As it sits, there's really nothing too memorable about this place except for the riverboat they stuck in the outfield. It feels like a discount bin knockoff of PNC.

Guaranteed Rate Field - I cant remember what it was called when I went and its not that the stadium itself was overly horrible, although the South Side of Chicago is horrifying if you stray more than a block or two away. It was just completely nondescript and had the most overly amplified sound system that would play some sort of sound effect or noise between every GD pitch. It's been posted before, but there is an absolutely amazing article that talks about just how badly they messed up the planning and building of this stadium. I'll see if I can dig it up if anyone is interested. Good baseball history in it.

Fenway - I went with my family for an Indians series against the Red Sox sometime in the early 2000's, maybe spring of 2001? We were in town for two days and were staying right across the street from Fenway. The first day was nonstop rain and the game was postponed before gates were ever even opened. No worries, my brother and I went into the ticket office and exchanged our tickets for the next game. It continued to rain all through the night and never let up the next day either. Both games got cancelled and I never got further than the ticket office before we had to leave.

Thurman Munson - Nothing great at all about the home of the old Canton Akron Indians, but my memory of watching young Manny Ramirez hit a ball further than I ever imagined possible will always stick with me.

Canal Park - Really, really underrated cheap kid friendly entertainment. I took my kids their first baseball game this summer and they had a blast. All the mascots walking around, the perfect rebranding into the Duck theme, and some awesome promotions made their night. Pretty easy to catch a foul ball there as well, if youre into that kind of thing.

A couple of years ago I had the opportunity to go to a game at Oracle Park in San Francisco. It was early July. Drop dead gorgeous location looking out on San Francisco Bay. You are able to see Alcatraz. Good sight lines, but I didn't get a chance to roam around the park to check it out.
As far as watching the game - the first couple of innings were fine. Did I mention this game was in July? Then it happened. It got cold, no freezing. I don't mean cool. Literally, it was like a Browns game in December. I smiled walking in and seeing people in winter coats. I figured I was from Cleveland, weather was no problem. Wrong. I was happy when the game was over. 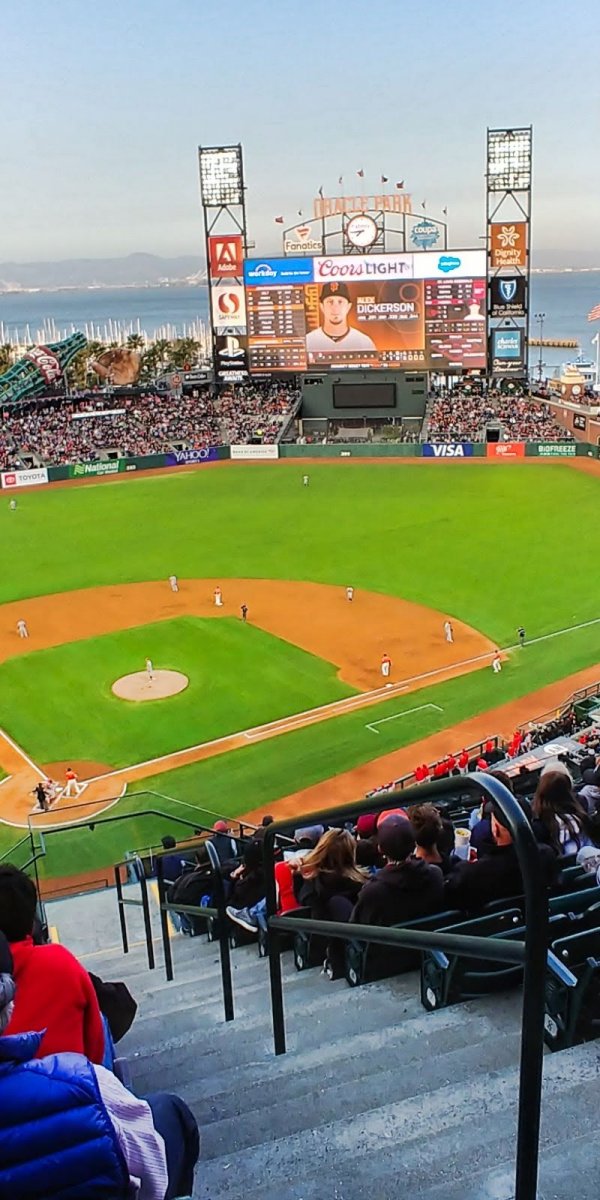 I saw games 6&7 of the 2001 WS in the BOB. Nothing too notable about the park except for the swamp coolers over the gates, though watching the roof open up was kind of fascinating.

But when Randy Johnson emerged from the dugout and trudged toward the bullpen in game 7, the place was absolutely electric.

Edit to add: The flyover by the B1 Stealth bomber was both creepy and exhilarating!
(Remember, this was in the aftermath of 9/11)

Film clip of Municipal Stadium game between Tribe and White Sox in 1956.

How many times will we be No-Hit this season?

Episode 1:11 "From the Mind of Koby Altman"
Top