Write-up to come later. On with the draft!

@raiders91sc and the Atlanta Falcons are on the clock! 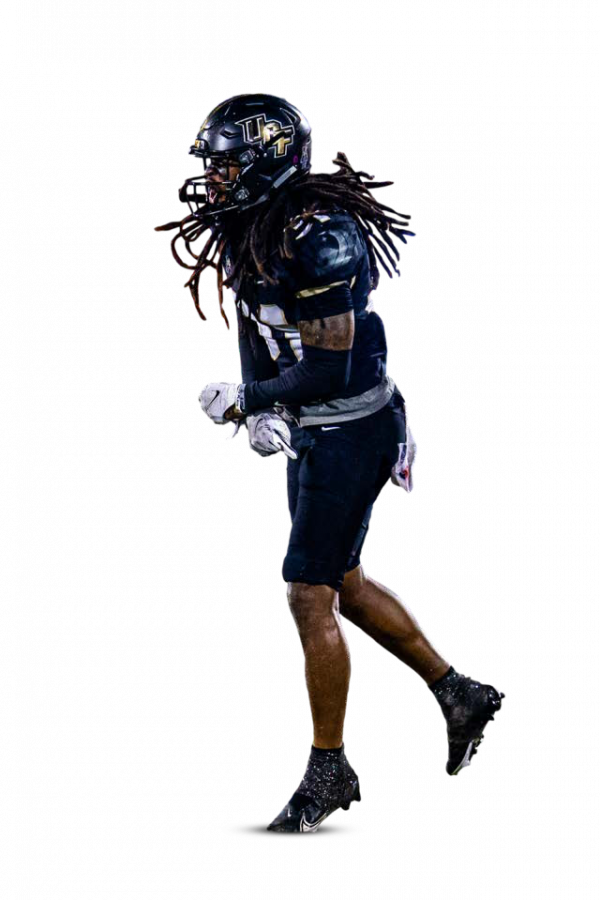 Pro
Legit short-area burst, especially for a taller corner.
Down to mix it up. He came downhill and attacked screens very well.
Easily has the "want to" to play safety or in the box if a team needs him there.
Quick to recognize routes. It's likely why he was put in the slot in the first place.
Con
Almost exclusively slot over his career despite having the size for outside.
Little slow to get on his horse on his transitions to vertical routes. Stacked a lot.
Jumpy to get outside leverage instead of staying patient. Leaves free seam runs.
Faced very little in the way of NFL-caliber receivers this season,
Last edited: Apr 7, 2021

With the 69th pick in the 2021 Mock NFL Draft, The Cintucky Bengals select:

Positives: Three-year starter with an underrated game. Plays with good lean, effectively uses his hands, and keeps his feet moving. Has excellent length, moves well about the field, and moves fluidly if asked to twist or stunt. Strong, displays the ability to push blockers off the line, and stays with the action.
Negatives: Not a great natural pass rusher and does not show much speed off the edge. Possesses an average closing burst.
Analysis: Turner was consistently productive for Houston and has both size as well as growth potential. He’s a developmental prospect who could eventually grow into a defensive tackle in a four-man line.

With the 70th pick in the 2021 NFL draft, the Philadelphia Eagles select:

BACKGROUND: Marlon Tuipulotu (Too-ee-poo-LOE-too) grew up in Gardena (15 miles south of Los Angeles) before moving to western Oregon and enrolling at Central High School. He hadn’t played tackle football before enrolling at Central, but he made an immediate impact with 57 tackles and a blocked field goal as a freshman. As a sophomore, Tuipulotu posted 72 tackles, 22.0 tackles for loss, 12.0 sacks and one forced fumble. He earned All-State 5A Defensive Player of the Year and Conference Defensive Player of the Year honors as a junior, leading Central with 78 tackles, 28.0 tackles for loss, 13.0 sacks and two interceptions. As a senior, Tuipulotu was named USA Today’s Oregon Defensive Player of the Year and All-American honors as he played both defensive line and offensive tackle. He finished with 62 tackles, 14.0 tackles for loss, 6.0 sacks and one blocked field goal. Tuipulotu also picked up wrestling as a junior to help his off-season conditioning for football and he won the Oregon state class 5A 285-pound championship. [169] A four-star defensive tackle recruit out of high school, Tuipulotu was the No. 5 ranked defensive tackle in the class and the No. 1 recruit in Oregon. He started receiving recruiting attention as a sophomore and collected offers from Michigan, Notre Dame and Oregon. He originally committed to Washington as a junior before flipping to USC just before signing day and enrolled early in January 2017. His younger brother, Tuli, is a rising sophomore defensive lineman at USC. His cousin, Talanoa Hufanga, played safety at USC and is a prospect in the 2021 NFL Draft. His cousin, Fili Moala, was a defensive lineman at USC and second-round pick (No. 56 overall) in the 2009 NFL Draft – he played seven seasons in the NFL. Tuipulotu graduated with his political science degree (December 2020). He elected to skip his senior season and enter the 2021 NFL Draft. He accepted his invitation to the 2021 Senior Bowl.

STRENGTHS: Thick, burly frame…hard player to move due to his base power…above-average play strength to bully blockers on their heels…skilled with his two-hand strike or violent push-pull to jolt and disengage…flashes a quality pass rush with his snap quickness, foot agility and swipe moves…keeps his hands and feet in unison to stay on schedule versus both the pass and the run…can peek-a-boo multiple gaps to track the ball carrier…strong hands to not only slow runners in the hole, but slam them to the ground…active pursuit player and gives consistent effort…his USC coaches say he brought “competitive edge” to practice every day…experienced lining up over the A gap or B gap.

WEAKNESSES: Doesn’t have an explosive first step to win with quickness alone…needs to keep his pads low out of his stance…has some stiffness in his lower body and hips, hindering his ability to abruptly change directions…doesn’t make many plays from the backside…can be more gap sound…didn’t show many counter options as a pass rusher on tape…average backfield production…his medical feedback will be important after missing most of the 2017 season with a sprained left knee (September 2017) and season-ending back surgery (October 2017), also missing 2018 spring practice; missed one game as a sophomore due to a back injury (November 2019).

SUMMARY: A three-year starter at USC, Tuipulotu lined up at nose tackle in defensive coordinator Todd Orlando’s multiple front. Some thought his play might suffer after Jay Tufele opted out of the 2020 season, but the opposite happened as he earned All-Conference honors as a junior and impressed NFL scouts. Tuipulotu flashes power in his hands to shock and knock back blockers, separating and locating the football in the run game. He doesn’t have a ton of backfield production versus the pass, but he accelerates into blockers and gives them all they can handle. Overall, Tuipulotu lacks elite

@MGMT is on the clock.

Just saw I was on; can someone make a selection for me please? I can barely keep my eyes open and my daughter won’t let me be on my phone for more than 30 seconds at a time @Randolphkeys @Hurl Bruce

With the 71st pick in the 2021 NFL draft, the Denver Broncos select:

BACKGROUND: Kelvin Joseph Jr. was born and raised in Baton Rouge and started playing football at the youth level. He lettered in basketball and football at Scotlandville Magnet High School (10 miles north of LSU’s campus) and was a three-year starter, seeing time at both cornerback and safety. As a junior, Joseph recorded 67 tackles, 15 passes defended and three interceptions, earned First Team All-State and led Scotlandville to the 2016 5A state championship. He again earned First Team All-State honors as a senior and was a U.S. Army All-American, finishing the 2017 season with 113 tackles, 12.0 tackles for loss and three interceptions. Joseph finished his high school career with 13 returned touchdowns on defense or special teams. A four-star safety recruit out of high school, Joseph was the No. 5 safety in the 2018 class and the No. 2 recruit in the state (behind former teammate WR Terrace Marshall). He received his first offer (Jackson State) as a sophomore and Les Miles and LSU soon followed. Joseph verbally committed to the Tigers, but kept his recruitment open, focusing on four schools: Alabama, Florida, Florida State and LSU. In the end, he stayed close to home and signed with LSU, becoming the first football player from Scotlandville to do so. After one season at LSU, he entered the transfer portal and signed with Kentucky. His best friend (Javonte Smart) is a junior guard on the LSU basketball team. Joseph opted out of the final two games of the 2020 season and entered the 2021 NFL Draft.

STRENGTHS: Loose-hipped athlete to easily flip and stay on the same plane vertically…plays with sudden twitch and easy speed to match receivers from start to finish…squats on routes in off-coverage, using his drive explosion to arrive before the ball…above average ball awareness and gets his head turned to find the quarterback…looks like a wide receiver with top ball skills making plays on the football…aggressive at the catch point and plays through the hands of the target…settles his feet to stay balanced as a tackler and see who he hits…competes with supreme confidence…experienced inside, outside and has the skill set to play any position in the secondary…finished second in the SEC with four interceptions (in only nine games) in 2020.

WEAKNESSES: Below average vision/eyes…inconsistent body position and misplaced hands downfield leads to penalties…room to get stronger…needs to be more forceful in his jam to reroute receivers…lackadaisical habits with his technique…allowed three touchdowns and several big plays in 2020 (his completions allowed averaged 16.5 yards)…meager playing experience with only nine career starts…there are character red flags due to youthful immaturity and accountability issues (on and off the field)…some of his former coaches go to bat for him, but some don’t (he “needs to grow up,” according to one former coach)…scouts say his rapping passion might supersede his football passion (has released six albums under the name “YKDV Bossman Fat”)…suspended for the 2018 bowl game for a violation of team rules…he had one foot out the door before the season was over and the coaches directed him to opt out.

SUMMARY: A one-year starter at Kentucky, Joseph was the boundary cornerback in head coach Mark Stoops’ zone/man scheme. After fizzling out after one season at LSU, he put together a productive nine games in Lexington in 2020 (four interceptions in nine games) before his effort level fell off and the coaches directed him to opt out (Stoops: “I can’t just have him out there standing around…”). A big-time athlete, Joseph has the rare ability to shadow routes without losing balance, displaying twitchy feet, fluid movements and high-end ball skills to consistently make plays. However, the sample size (nine career starts) and character questions are a concern and his undisciplined eyes lead to completions for the offense. Overall, Joseph won’t be a fit for every organization due to maturity concerns, but he has first-round physical talent and the athleticism to blanket any type of receiver, which is why a team will likely roll the dice on him in the top-50 picks.

How do we settle this?

I pulled my pick, Hurl posted his first. That's literally how duels are settled.

Now I want to know who the other pick was!

@Amherstcavsfan is up, @G00seY3 is on deck then of course it is me! I should be awake and ready to post today! Haha

Randolphkeys said:
I pulled my pick, Hurl posted his first. That's literally how duels are settled.
Click to expand...

Was hoping for RCF Trivia, or potentially even a real duel.

I suppose that works, though.

AZ_ said:
Was hoping for RCF Trivia, or potentially even a real duel.