Do Not Sell My Personal Information
K

Cassell Is Not Having Fun

His familiar smile missing, Sam Cassell admitted that with the losing, he is not having fun like he usually does.

"We are 10-21," Cassell said. "That doesn't make it fun to enjoy. I'm still optimistic about how we can turn things around and see what we can do." 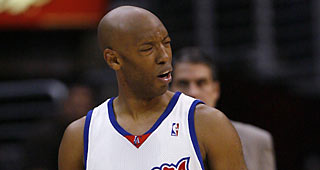 Cassell was the straw that helped stir the Clippers to their playoff run in 2005-06. But he hobbled through injuries much of last season and, so far this season, has not fared much better.

He is 38 and in the final season of a two-year contract. He has stated he would like to play one more season and then become an assistant coach.

Asked whether he would like to play for a team with championship aspirations to finish this season and his career, Cassell said he wasn't at the point of requesting a trade.

"We'll see," he said. "It ain't to that point right now, but we'll see. I started this thing and we'll see how it pans out.

Well we seem to enjoying talking about point guards, young and old. Here's one for the vet's!
T

Id take him in a heart beat
I love this guy!

but man is he ugly

Sam is the mold of a true quarterbacking point guard of the old school. One who has the ability to control a game with his brain and is a very strong extension of a coach on the floor.

For what he could teach Boobie alone, I would take him in a heartbeat. He has never been considered a defensive stud, but the man is a fierce competitor who I never saw mail in a night.

I'd take him in a heartbeat and he would be such a low risk move that I know that even if he only played 20 mins a night, what he would bring off the court would be just as important
C

If they would accept Newble + Brown or Newble + Simmons, I'd take him in a hearbeat. But I don't quite see that happening. Since Cassell is an ending contract, I'm sure they'd want other ending contracts or young talent. Or, more likely, I'm assuming they'd rather try to package him with Tim Thomas to get rid of that contract. If that's the cost, I'll pass. Unless we could dump Hughes on them... Hughes, Brown and Newble for Cassell, Mobley and Thomas works. HUGE talent upgrade. We take back two players they would like to move. But they only last as long as Hughes.
N

I'd take Cassell at the trade deadline if nothing better could be had. He at least brings an experienced PG and proven winner. He also has an ending contract so there's no long term commitment.

Matching salaries could be the tough part. Can't see the Cavs willing to give up much for a few months of Cassell.

A Damon Jones + Shannon Brown for Sam Cassell type deal makes sense if we can't get Bibby, Miller or some other legit PG...

They get a shooter, something they need, an expiring contract and a prospect... Plus DJ's contract is only until after next season...

For us we'd get a nice, veteran, crafty PG that would start immediately... He's also an expiring contract and we get rid of DJ...

38? Eh, hes still probably a better PG than anyone on our team now. I dont know if he'd survive though, gots some durability issues

E.T. as a stopgap for the season? Why the hell not? It's not the first trade I'd want to make, but I wouldn't be opposed to it.

It's the level of sexiness Sam brings to the table that makes this deal pretty damn tempting..

My God, that was homoerotic.

Best in the World

He's old, but better then anyone on our team as far as PG goes. However, he has about a year or two left before he turns into an eric snow probably.

Rumor going around The Cavaliers could land Sam, or Dallas. From ESPN Rumors, I guess.

Keep an eye on Sam Cassell. He isn't asking to be traded out of Clipperland. But if the team continues to struggle, that could change.

Cassell would be a very intriguing addition to any playoff-bound team -- especially Dallas or Cleveland. -- The Detroit News
Click to expand...