The "What are you playing now?" Thread

Just picked up Valheim. It's now a top 10 game by number of players playing and it has a 97% Overwhelmingly Positive reviews on Steam.

So, was balls deep in a Tomb Kings campaign in WH2 and just assumed Steam would cloud save.

Just reinstalled after putting in my new SSD and wiping the old one. All my saves are gone. Dope.

Time to start a new one I guess.

Man on the Moon

Anyone know if Spiderman on PS5 is still a buggy mess?

I tried playing it a few weeks ago and it hard froze my system in the first hour of the game.

Just finished Ghost of Tsushima (awesome game) and am looking for something new to start.

Man on the Moon

Chris said:
The better question is how the fuck did you get a PS5
Click to expand...

I actually got a preorder doing that back in like July through Target.

Chris said:
So, was balls deep in a Tomb Kings campaign in WH2 and just assumed Steam would cloud save.

Just reinstalled after putting in my new SSD and wiping the old one. All my saves are gone. Dope.

Time to start a new one I guess.
Click to expand...

Do you have the old drive still? All the data is there, just copy it over and point steam to it.

Nah wiped it. I should have waited, but all I needed moved over was my school documents folder and I had that on Google Drive. Never even occurred to me about saved games on Steam.

Least my DOS2 saved in the cloud. All good. Started a Greenskins campaign.

Chris said:
So Kislev and Cathay don’t have tabletop sets right? I don’t play so I dunno, I just heard that- makes me interested because that would mean they’re being designed from ground up.

I think Kislev does.


Saw that if you pre-order you'll get early access to another faction. Here's hoping it's Chaos Dwarfs.

Rich said:
I think Kislev does.


Saw that if you pre-order you'll get early access to another faction. Here's hoping it's Chaos Dwarfs.
Click to expand...

Feel like they will save Chaos Dwarves for a paid DLC later on. We'll see though.

I've been playing Valheim with a couple of friends for the past week. Game is a ton of fun. It's basically Don't Starve but in 3D and a Norse makeover. You know the routine by now. Collect resources. Craft shit. Get your ass handed to you when you wander into the wrong biome before you're ready. Upgrade your gear. Repeat as necessary. This game specifically casts you as a Viking warrior who died in battle and was sent to Valheim, a purgatory where you must prove yourself to Odin.

I guess what sets Valheim apart is the sheer size of the world. It is fucking massive. The low-poly graphics allow for that and for you to craft as much as you want wherever you want. We've already got about five different settlements. I also built an entire Viking-style long hall on the beach near where the game dropped us in, and fully intend to build an entire village in that area over time, provided I don't lose interest in the game and move on.

The game is structured as a series of boss fights. Each boss gives you an item that will be essential in your progression into the next biome, which in turn will allow you to continue down the tech tree.

Beating a boss also has an impact on the challenge the world presents to you. From time to time, your settlements will be raided, and each time you beat a boss the raid will be composed of enemies from the next biome you're expected to explore. It's a neat, clever little setup, although the raids can be annoying if you're the only one at the base when it happens. During one raid I was left running in circles for about five minutes as seven enemies chased me. Individually, they posed no real threat to me, but half a dozen or more all hitting me at once would take me down fast, and as I was just working on my long hall when it happened, I didn't have the type of food items and potions that I'd normally take with me while exploring a dangerous biome.

What I really love about this game, though, is the building. It took some time for it to click, and my early buildings looked like shit, but now that I've gotten the hang of it, my buildings are beginning to look legitimately good. My long hall in particular looks amazing, and last night I helped construct a bridge over a river along with a small house on one side with a fire, a storage chest, and a couple of beds. The bridge leads into the Swamp, which is the game's dangerous third biome and the one we are currently conquering, so the shack serves a functional purpose to allow people to rest by the fire (which gives you buffs), to store any extra supplies, and to set a spawn point (this is what beds are for, along with moving from night to morning).

The visuals in the game are interesting. The character models and textures look like something out of a PS1 game, but the lighting, water, and fog effects work to make the game quite pretty at times.

Really looking forward to seeing what they continue to add to Valheim, as it's an early access game. It doesn't really feel like one, though. The enemy AI can be dumb as shit sometimes with very questionable pathfinding, but there haven't been many bugs that I have seen. The game also doesn't suffer from a lack of content. We're only in the third of five biomes after a ton of time spent playing, and that's four people playing regularly and a few more playing sporadically. Sure, we could probably be pushing a little faster, but I don't see any need to rush the game. More fun to let it come to us.

There are plans to add in other biomes, and I think several are already in the game, just currently unpopulated.

Also, one awesome little feature is how you'll occasionally see a hooded figure with a staff watching you from a distance. He'll disappear if you try to get close, and a few of my friends kept calling him the grim reaper. It's obviously meant to be Odin, though. I've only seen him twice, but it's neat touch that adds to the creepy atmosphere of the game.

It's a lot of fun, particularly with people you know and trust to not be fuckwads. We've got a good group with everyone working together and sharing resources. 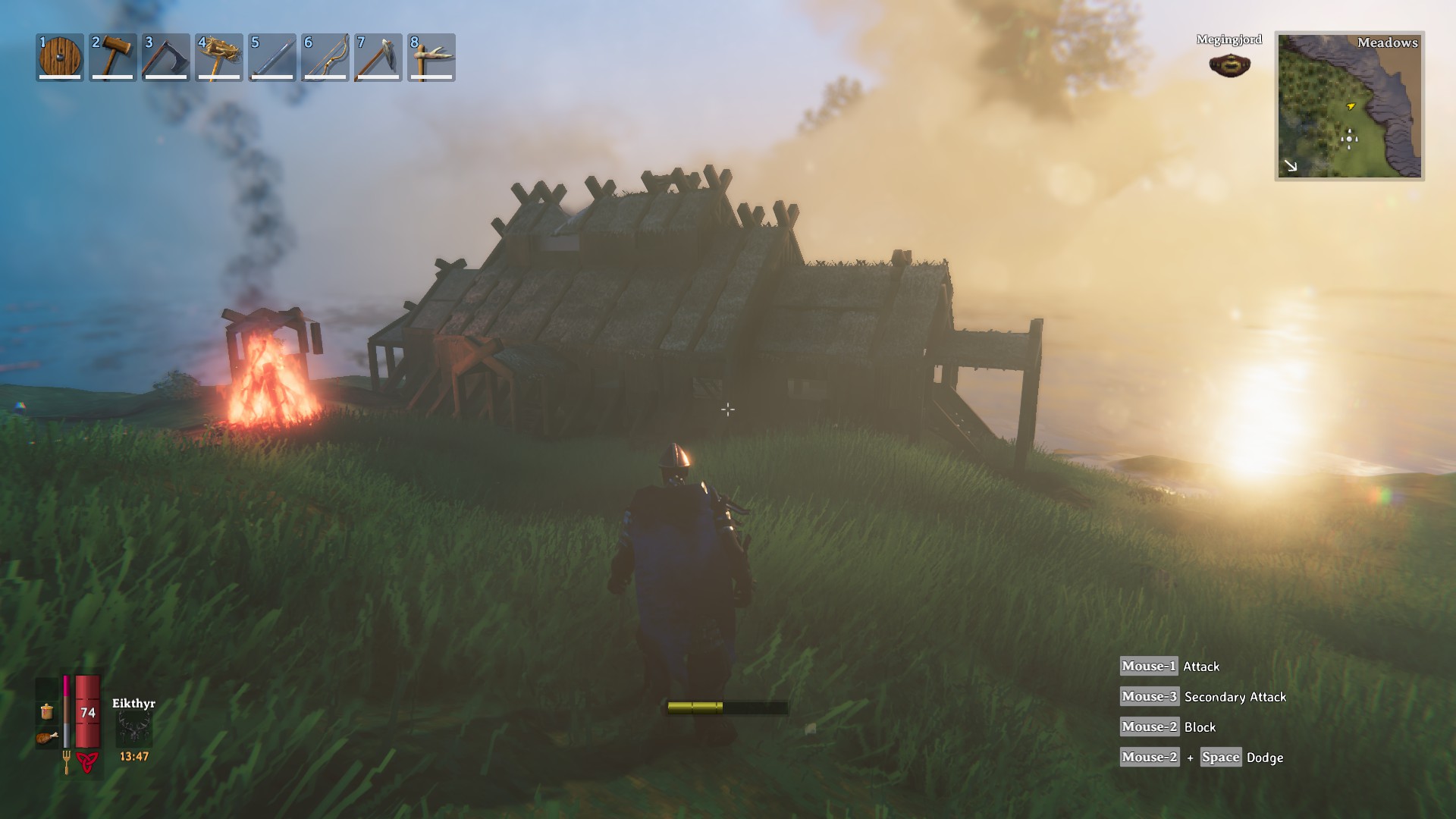 Ignore the junk behind the bonfire. It's just a small structure that was already there and I hadn't gotten around to fully tearing it down yet. I took another shot after I tore it down but the sun was a little higher up and the lighting wasn't as good.

One of my favorite things about this game is the fire system. If you want an indoor fire, you need to build a chimney into your building design or smoke will fill up the room and slowly kill you. You can see the chimney in the above image near the left side of the top roof section.

Added to my growing Valheim village with a new blacksmith building. It's not quite done yet, as the inside is almost completely empty, but I've got the exterior almost entirely completed. Still need to ornament the left side roof of the house and add a few other cosmetic touches, but I needed to take a break and it was done enough for me. Note that this little spot is my own personal village that no one else has worked on. We've got two other main bases that I've also contributed to, but this spot is entirely me. It's not terribly functional right now, but that will change over time as I add a few new buildings and get the time to accumulate some rarer resources that will be necessary to fully upgrade everything.

Have had my PS5 for about 2 months now, and my dualsense controller is already suffering stick drift. Valhalla is almost unplayable as the right stick shoots to the top of the screen randomly. I discussed with Sony and they said I can likely get it repaired under warranty but there's no fix at home, so I'm monitoring it further.