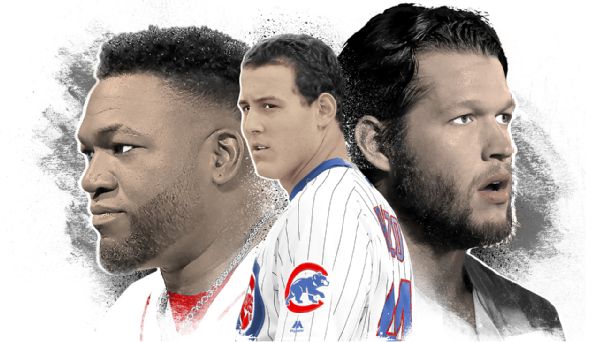 People say a lot of things about the postseason. Here's one thing that I completely agree with: Anything can happen.
Everyone has tried to find a Holy Grail for predicting the playoffs. In recent years, popular explanations have focused on contact rate for offense and bullpen dominance on defense. If those are trends that continue to translate, then it's worth noting the San Francisco Giants and Boston Red Sox are the two playoff teams with strikeout rates less than 20 percent. As for bullpens, of the eight teams with the lowest bullpen ERAs, seven made the playoffs, all with ERAs between 3.35 and 3.56. Only the Baltimore Orioles, however, have a closer who went 47 for 47 in save opportunities.

In this record-setting year for home runs (second-most ever hit in one season), maybe the long ball will decide the postseason. The Orioles led the majors in home runs, and the New York Mets have the most of the NL playoff teams. You probably know where I'm going: Not a good predictor for postseason success (although a couple of years ago Ben Lindbergh of Grantland examined playoff teams from 1995 to 2013 and found teams that were more reliant on the home run lost a lower percentage of their regular-season scoring than teams less reliant on the home runs).

Let's examine a few other things people like to say:

How you play heading into the postseason matters
When the Red Sox won 11 games in a row from Sept. 15-25, I heard one analyst proclaim, "This is exactly how you want to be playing heading into October." Of course, the Red Sox ended up losing five of their final six games, which is presumably how you don't want to play heading into the postseason.
As it turns out, our past 10 World Series champs played about the same in September and in the final two weeks as they did overall throughout the season.

Overall, the hot teams did fare a little better, so this idea isn't completely without some merit: The hot teams went 49-42 in postseason games and the cold teams went 27-31.

The best team wins
Well, if by "best" you mean best regular-season record, this hasn't been the case, leading to the popular: "The playoffs are a crapshoot" theme. Since the wild-card era began in 1995, the only teams with the best record to win the championship are the 2013 Red Sox (tied with the Cardinals, whom they beat in the World Series); 2009 Yankees; 2007 Red Sox (tied with the Indians); and 1998 Yankees. That's four for 21, in case you Cubs fans are keeping track.
Another way to look at this is by comparing the playoff teams with the best record versus the playoff teams with the worst record.

The best teams have gone 64-51, a .557 winning percentage; the worst teams have gone 59-52, a .532 winning percentage. Three teams with the worst record in the postseason have won the World Series: The 2014 Giants, and the 2011 and 2006 Cardinals. There seems to be no significant advantage for entering the playoffs as the best team. Even if you won 103 games and outscored opponents by 252 runs. It means the Mets and Giants, with 87 wins, can't be discounted. 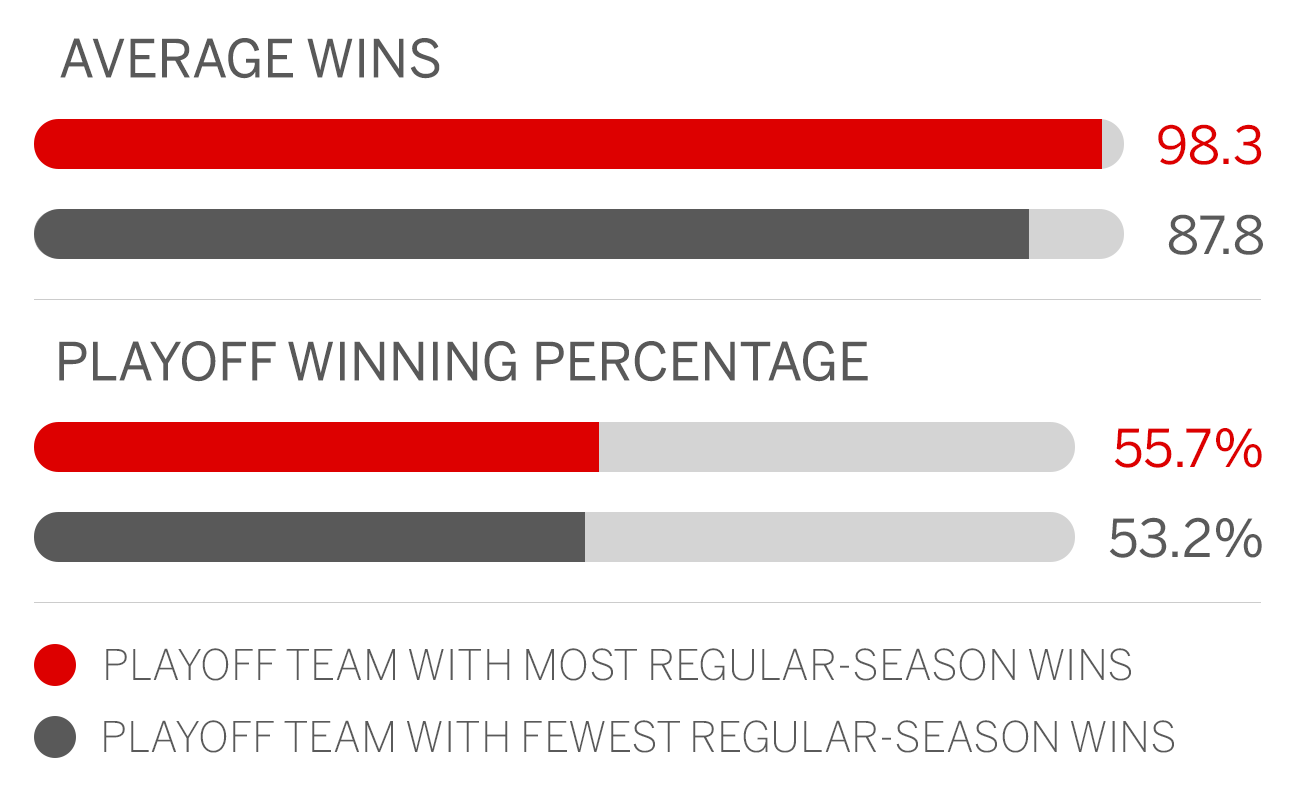 Home-field advantage is huge
There's a term called "ultimate games," which refers to the final, do-or-die game of playoff series: A wild-card game can be considered an ultimate game, as can Game 5 of a Division Series or Game 7 of an LCS or World Series. Since 2006, the home team hasn't fared so well in these games.


Both visiting teams won last year's wild-card games -- the Houston Astros at Yankee Stadium and the Cubs at Pittsburgh, and Madison Bumgarner, who pitches at Citi Field on Wednesday, has done this before, beating the Pirates on the road in 2014. Bumgarner was kind of a one-man road warrior that year, pitching the final five innings of Game 7 of the World Series to beat the Royals. That was the first time the road team won Game 7 of the World Series after nine consecutive defeats, however, so maybe that's still good news for the American League, which won the All-Star Game.

We've actually had few ultimate games in the LCS and World Series of late. Only two World Series in the past 13 went the distance and only one of the past 14 LCS went seven games. Let's hope for more this year.

Starting pitching wins championships
This refrain took a punch to the stomach last season when the Royals rode a subpar rotation but magnificent bullpen all the way to the title, beating a team built around its rotation in the Mets. That's just one example, of course, and, in the Royals' case, it wasn't that the starters were pitching well in the postseason (they had a 4.07).
Below you can see where the past 10 World Series champs ranked in starting pitchers' WAR (via FanGraphs) and ERA among the 30 teams that season.

One more way to look at this. I checked the playoff team in each league with the best ERA each season. Here's how those team fared in the playoffs:

Teams with powerhouse rotations haven't fared particularly well. The 2008 Phillies, for example, won it all with a young Cole Hamels, an old Jamie Moyer and Joe Blanton, but couldn't win it all with Hamels, Roy Halladay and Cliff Lee. Of the 20 teams to lead their league in rotation ERA, the only World Series winner was the 2007 Red Sox. 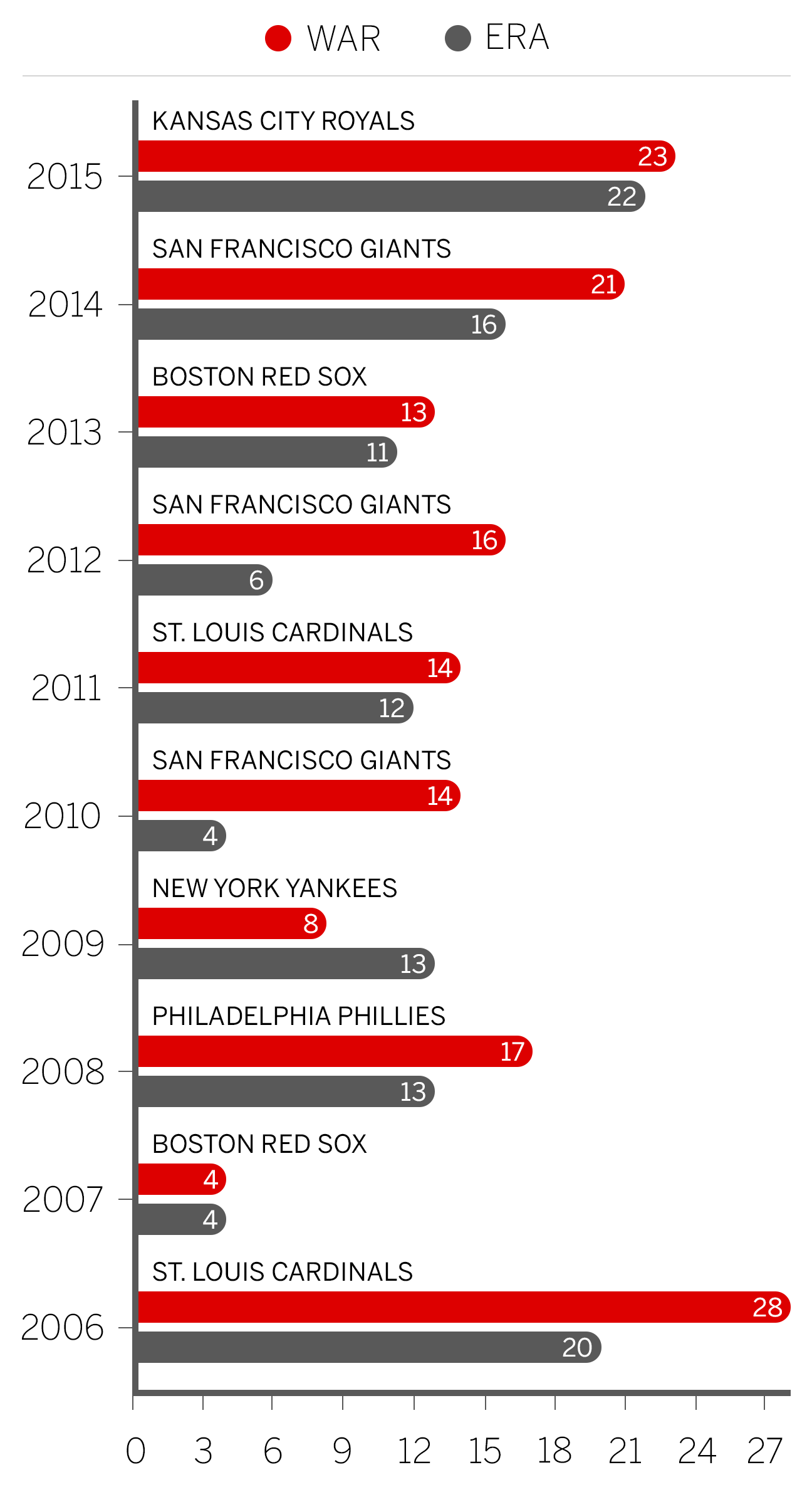 Myth: Postseason experience is important
There are a lot of different ways to examine this topic, but I focused on starting pitchers, since it seems that's the area where "postseason experience" is most often brought up.
With the help of the Baseball-Reference Play Index and a trusty spreadsheet, I listed all the playoff starts between 2006 and 2015 and broke them down into a player's first career start, second career start, third, fourth and then fifth through 10th. If experience matters, we should see some sort of improvement, right?

Starters actually fared best in their first career postseason start. We had 107 such starts and the pitchers combined for a 3.48 ERA while averaging 5.6 innings. In their second starts, they posted a 4.17 ERA; in their third, 4.79; in their fourth, 4.24. The most experienced guys had a 4.20 ERA. I see nothing here that suggests experience for starting pitchers is an advantage. That's not the same thing as saying it doesn't exist; maybe a more involved study can come up with a different conclusion. Maybe fatigue later in the playoffs contributes to higher ERA in later starts.
Among the memorable first career postseason starts last year: Jake Arrieta with a shutout in the wild-card game; Dallas Keuchel with six scoreless innings in his wild-card start; Jacob deGrom with seven shutout innings against the Dodgers; Lance McCullers with two runs in 6.1 innings against the Royals. 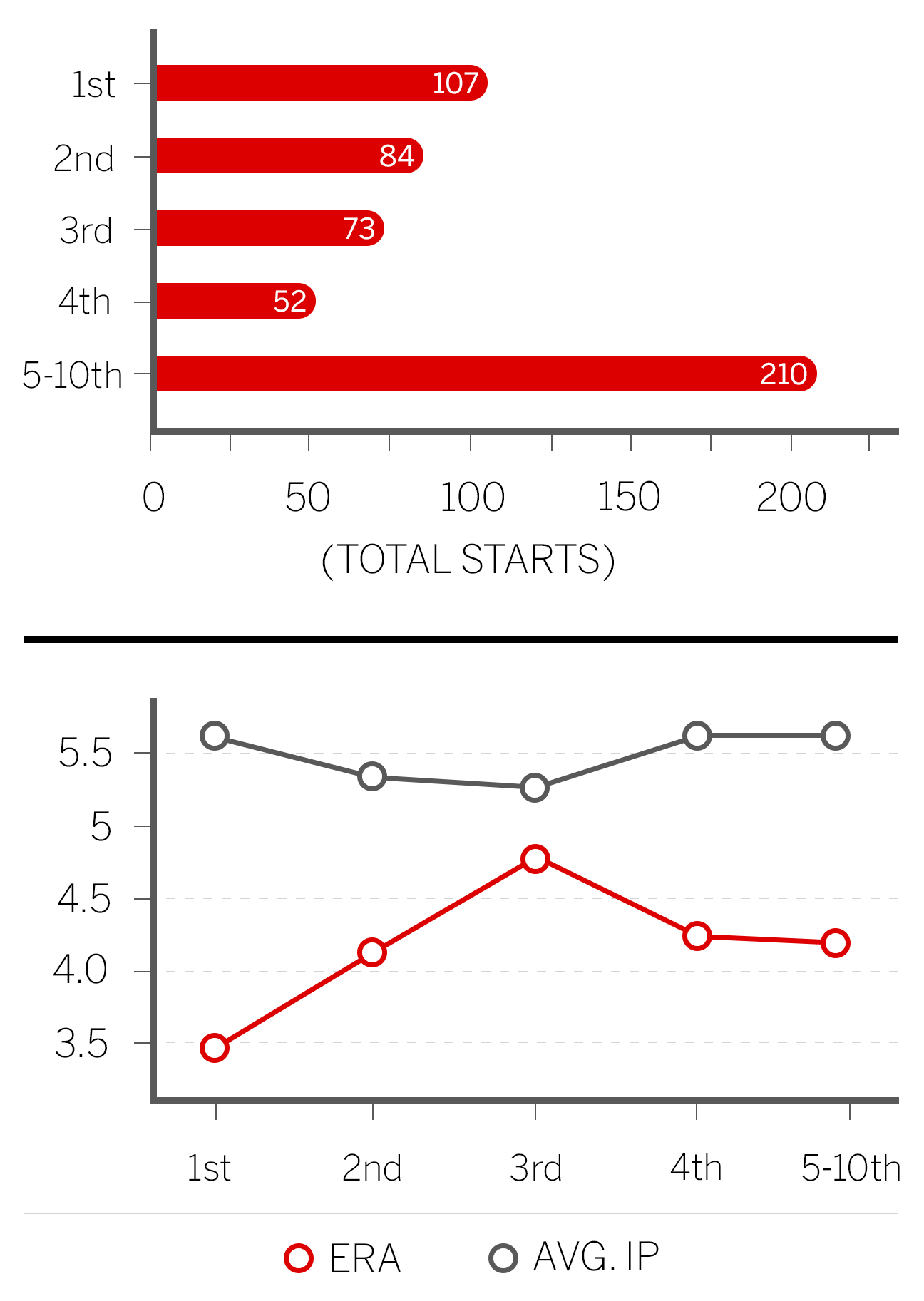 Myth: Curses exist
Wait, this isn't a myth! This is fact! Just check out this chart and tell me fans of these teams don't believe in curses ... or at least some form of the baseball gods treating them unkindly. These seven playoff teams have gone a combined 362 years without a title. I didn't include the Mets, who last won in 1986, so that's 392 years. Using some rough estimates and accounting for the changes in the numbers of teams through the years, if championships were evenly distributed, these eight teams should have won about 15.8 titles -- including five or six by the Cubs. That's what makes this year's postseason so much fun: Eight of the playoff teams have gone at least a generation without a title. The Expos/Nationals franchise, born in 1969, has never been to a World Series. The Orioles and Dodgers haven't been to one since the 1980s. The Rangers are 55 years without a title, and the Indians 68 years.
So, yes, the Cubs are cursed. But they have some company. 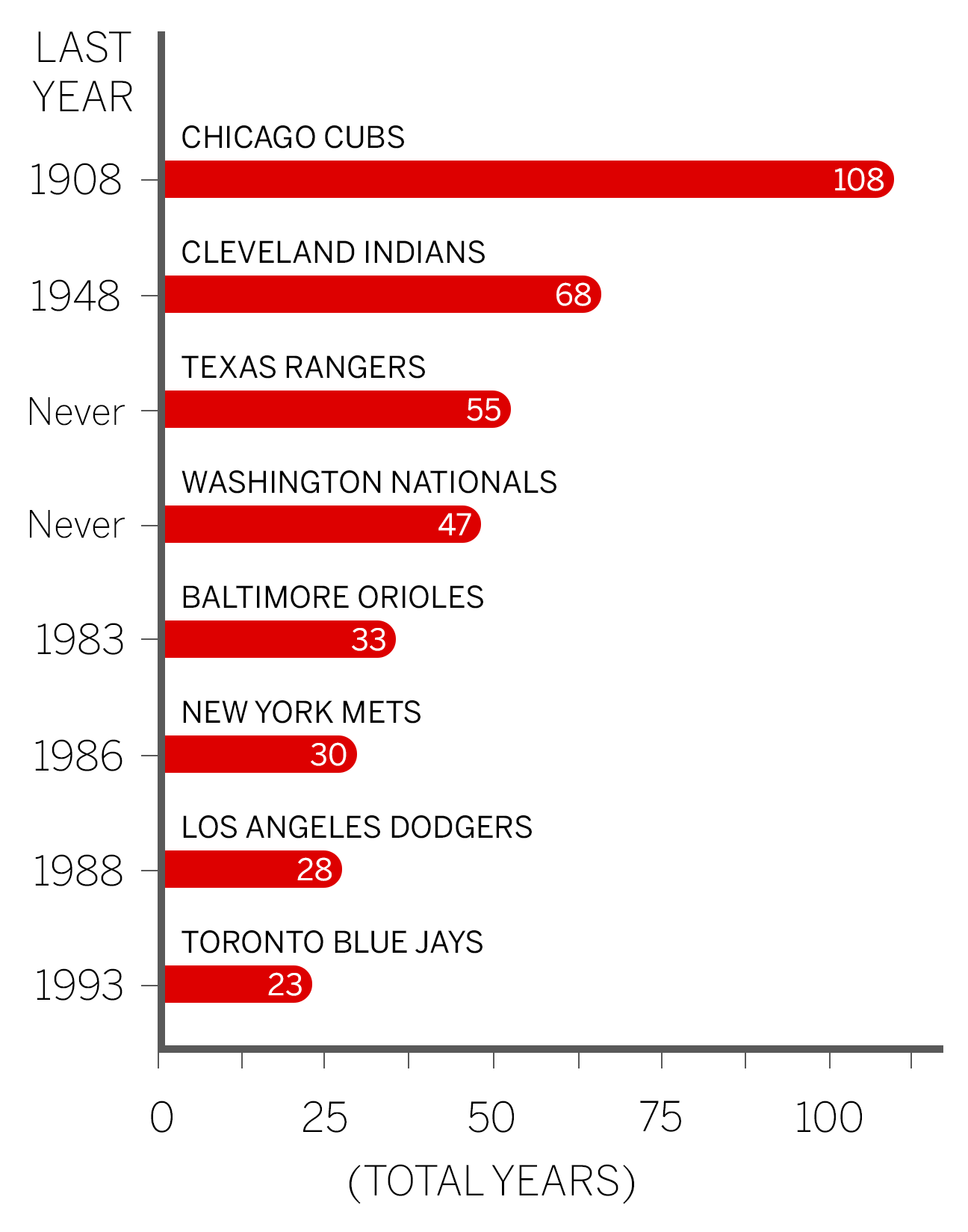 Must read. Read, study, memorize if need be.

So is the answer it's a crap shoot?

Because that's been my opinion

Who gives a fuck about how long it's been for anybody but the Indians and the Cubs?

They're the goddamn storyline here.

David. said:
So is the answer it's a crap shoot?

Can we figure out why baseball is such a crap shoot? I would love a long detailed article. I would offer input

David. said:
Can we figure out why baseball is such a crap shoot? I would love a long detailed article. I would offer input
@jking948
Click to expand...

I think it's a pretty simple explanation.

The first is once you get into the playoffs, the overall margin separating teams is quite small. Unless a team plays in an easy division, they would have had to win a very high number of games to even get there in the first place.

Secondly, there's so much more variance in baseball than other professional sports. It's not as dependent on talent than basketball or football...the "best team" in baseball on paper can and does lose regularly. It's easy to understand how this can happen, because even the best hitter on a team usually averages less than 2 hits per game. So much of it is situational and circumstantial as to when runs are scored and how many, that on a game to game basis, predicting when it will happen is extremely difficult. Add the "pressure" of the playoffs on top of that, (which many players are susceptible to) and the results are even more erratic.

This only applies to the postseason though. I think you can do a reasonably good job at predicting the final standings for the regular season with various statistical methods.

If you look at the winning %'s compared to other sports, it crazy how close baseball teams are. Relating it to the NFL, every single team except the Twins and the Cubs basically averages out between 7-9 and 9-7. Really minuscule differences separate these teams. Even accounting for the Cubs and Twins, you're just adding in a 10-6 and a 6-10 team.

The Indians are obviously very good and have a chance to win, but there is a slim chance this article would have been posted and praised if the Indians didn't lose Salazar and Carrasco to injuries.

elcheato said:
The Indians are obviously very good and have a chance to win, but there is a slim chance this article would have been posted and praised if the Indians didn't lose Salazar and Carrasco to injuries.
Click to expand...

As the person who posted the article, I can assure you I would have posted it either way. Even outside of the starting pitching myth listed above, the rest are a series of myths that have been discussed to no end on these boards. You could go down the list and find each and every item being discussed on here at some point over the last month.

Just a little bump to remind you all that us playing extremely well down the stretch, have a great rotation, obtained home field advantage throughout the AL playoffs, and were there last year doesn't mean a ton in terms of predicting success this year.

However, it's not all doom and gloom. We have as good of a chance as anybody, due to our fantastic bullpen, and talented/flexible roster.

Derek said:
Just a little bump to remind you all that us playing extremely well down the stretch, have a great rotation, obtained home field advantage throughout the AL playoffs, and were there last year doesn't mean a ton in terms of predicting success this year.

However, it's not all doom and gloom. We have as good of a chance as anybody, due to our fantastic bullpen, and talented/flexible roster.
Click to expand...

Well, last year, I was very happy to see this post.