RCF Mock-Draft write up by, @TopGun,

With the 32nd pick in the 2017 RCF Mock Draft, the New Orleans Saints select

With Derek Barnett selected 11th, the Saints look to continue rebuilding their defense with possibly the most dynamic player in the draft. Peppers is a tremendous athlete with a high football IQ. He excels at shutting down screens and outside runs with his ability to avoid blockers and get to the ball. He may take a little while to adapt to a move to safety full time, but his work ethic and love of the game leads me to believe he will not fail.

PLAYER OVERVIEW
The NFL prizes versatility and in 2016, no one proved more capable of starring in multiple roles than Peppers, the most celebrated player at Michigan since the great Charles Woodson, still the only primarily defensive player to ever win the Heisman Trophy.
Earning snaps at 15 different positions on defense, offense and special teams, Peppers was an easy choice for the Paul Hornung Award as the nation's most versatile player and also was honored with the Lott IMPACT Trophy as the nation's top overall defender. The First Team All-American and Heisman finalist was the first player in Big Ten history to win three individual awards, being named the conference's Nagurski-Woodson Defensive Player of the Year, Butkus-Fitzgerald Linebacker of the Year and Rodgers-White Return Specialist of the Year.

In addition to the two national awards he received, Peppers was also a finalist for the Chuck Bednarik Award, Maxwell Award, Bronko Nagurski Award and Walter Camp Player of the Year Award and was a semifinalist for the Jim Thorpe Award.

The multi-talented Peppers finished third in both tackles (72) and all-purpose yardage (an average of 62.6 yards per game) for the Wolverines in 2016, while leading the team with 16 tackles behind the line of scrimmage, including four sacks. Dynamic with the ball in hands, Peppers averaged 6.2 yards per rush, 14.8 yards per punt return and 26 yards when fielding kickoffs, scoring four touchdowns on the season.

Peppers' ascent into college football superstardom was a hardly a surprise. He signed with the Wolverines as one of the more highly touted preps in the country and appeared ready to make an immediate impact before a series of leg injuries forced his redshirt after three games.

Peppers primarily played linebacker in 2016 but saw most of his action in the defensive backfield as a redshirt freshman a year earlier, recording 45 tackles (including 5.5 for loss) and 10 passes broken up. He also ran for 72 yards (on 18 carries), caught a career-high eight passes for 72 yards and served as a punt and kick returner, averaging 11.4 and 27.9 yards per return, respectively.

The decision to move Peppers closer to the line of scrimmage in 2016 was seen by some as an indication of weakness in coverage. In reality, it may have been a testament to Michigan's experience and talent in the secondary and relative lack of speed at linebacker. Showing the combination of instincts, aggression and remarkable athleticism scouts are searching for, Peppers is one of the true stars of the 2017 draft class, projecting best as a safety in the NFL.

STRENGTHS: Peppers possesses a compact, muscular frame and the easy athleticism that translates well to the NFL. Peppers is one of the most instinctive players in the country, showing terrific awareness and the closing speed to take full advantage of his awareness. He accelerates quickly, showing the quick-twitch burst to flash through gaps and close on ballcarriers and easily changes directions, possessing loose hips, greasy knees and flexible ankles to elude would-be blockers or defenders attempting to tackle him, alike. Peppers' agility and acceleration help him remain in the hip pocket of receivers, helping him project well to safety or even cornerback at the next level, should that be the need of his future NFL team. Despite his lack of ideal size for playing near the line of scrimmage, Peppers is a highly competitive and surprisingly physical defender, unselfishly taking on blockers to push ballcarriers toward the cavalry. Though he will occasionally come in too hot and leave himself off-balanced, Peppers is a very reliable open-field tackler, showing impressive closing speed and surprising pop with his hits. He wraps securely and does not back down from bigger ballcarriers, showing toughness and technique, alike, to limit yards after contact. Peppers is a natural with the ball in his hands, showing excellent vision, patience, elusiveness and acceleration as a returner. Though he only has one career interception, Peppers tracks the ball well and shows good hands, including the ability to pluck outside of his frame. Peppers possesses excellent straight-line speed. He won the 100-meter dash and the 200-meter dash at the New Jersey Meet of Championships as a junior and senior, becoming the second male in meet history to win both events in consecutive years, breaking the state record in the 200 meter dash with a time of 20.79 seconds in the championship meet as a junior.

WEAKNESSES: Will be viewed by some as a tweener, lacking the bulk to remain close to the line of scrimmage, and has limited experience playing deep in coverage. He is surprisingly strong but is often reliant upon avoiding rather than taking on blocks and is knocked to the ground too often, struggling to recover when knocked off-balance. He is hyper-aggressive in pursuit, attacking the ball with such fervor that he leaves cutback lanes for savvy ballcarriers to exploit. This issue is exacerbated by Peppers' lack of ideal length, leaving him grasping at air as runners hesitate and let him run by. Despite his reputation as a playmaker, Peppers recorded just one interception (and one forced fumble) during his college career.

IN OUR VIEW: A wolverine personified, what Peppers lacks in size he makes up for with ferocity and speed. Michigan featured him on offense, defense and special teams and his NFL team would be wise to do the same as Peppers is a natural playmaker capable of starring in any number of roles, depending on the down, distance and creativity of his coaches.

COMPARES TO: Troy Polamalu, Pittsburgh Steelers (retired) -- Few players can match Polamalu's instincts, improvisation and flair for the dramatic but Peppers is close. He will occasionally frustrate with his over-aggressive style of play but like Polamalu, Peppers will make more big plays than he will ever surrender.

... Welcome Jabrill. Prove it to us and let's go get this thing.

Not my favorite guy in the draft, but even a blind man can see that he is a Gregg Williams type through and through. Hes also electric when he has the ball in his hands. He is TJ Ward but a better athlete, and Im a big fan of that type of player.

Los216 said:
This thread will be the Browns version of the Dion Waiters thread lol
Click to expand...

Fortunately we didn't draft Peppers at #4

Amherstcavsfan said:
Not my favorite guy in the draft, but even a blind man can see that he is a Gregg Williams type through and through. Hes also electric when he has the ball in his hands. He is TJ Ward but a better athlete, and Im a big fan of that type of player.
Click to expand...

I'm not the BIGGEST Peppers fan, but I get the fit and I think there is a CLEAR constant with the type of guys they are drafting. So far they've taken 3 versatile athletes.

Lot this dude needs to work on, but has some crazy ass talent.

Makes sense when you consider the number of needs on the team.

But then when I think about the number of needs that the team has, I could also make the case that the teams needs more "tent post" players to give the young guys some structure to fit into.

Los216 said:
This thread will be the Browns version of the Anthony Bennett thread lol
Click to expand...

Fixed. Waiters was actually regarded as a good prospect. Bennett was one of those undersized tweeners that didn't have a real position established but flashed ability.

This is a big reach for a kick returner

Huber. said:
This is a big reach for a kick returner
Click to expand...

Don't forget punt returner and he will see some valuable playing time from the wild cat, right?

Kbiz8288 said:
Fixed. Waiters was actually regarded as a good prospect. Bennett was one of those undersized tweeners that didn't have a real position established but flashed ability.
Click to expand...

Lots of similarities between this front office and the Chris Grant front office. Managed not to screw up Garrett/Irving, and then...well, you know. Great at accumulating assets, though.

bushwick_bill said:
Don't forget punt returner and he will see some valuable playing time from the wild cat, right?
Click to expand...

A real player maker. Just put him in there and let him roam around and let his swagger do the talking!

Hmm punt returner, you say? I remember a player that even if he was awful in the secondary, could still contribute as a return man b/c he was a playmaker. 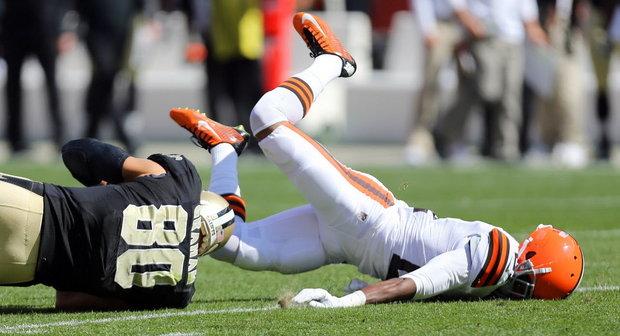 How'd that work out for us?

Kbiz8288 said:
Hmm punt returner, you say? I remember a player that even if he was awful in the secondary, could still contribute as a return man b/c he was a playmaker.

How'd that work out for us?
Click to expand...

I wonder if you think thats the worst post you ever made? What do you think?

Peppers is a totally different person than Gilbert.

Amherstcavsfan said:
I wonder if you think thats the worst post you ever made? What do you think?

Peppers is a totally different person than Gilbert.
Click to expand...

I am not comparing players. I am comparing the fact that people are already saying, "at worse, he's a decent return guy." We've heard that before.

Amherstcavsfan said:
I wonder if you think thats the worst post you ever made? What do you think?

Peppers is a totally different person than Gilbert.
Click to expand...