A nice little oasis in the off-season for us:

To me this is huge. Both as a fan and for a little team development. I want reports of the workout sessions. I want some head to head games. And even better, as it seems this comes after the draft lottery, the results of these scrimmages or games will have zero effect on draft positioning.
C

Ozone said:
Abbott’s ID NOW rapid COVID test suggesting that infected patients were wrongly told they did not have the coronavirus, which had led to the deaths of tens of thousands of Americans. The problem is the numbers of
false negative results not false positives imo.
I am not sure what NBA is utilizing but there are a lot of different options and given the NBA will need to know quickly they are definitely using a similar rapid result type of SARS-CoV-2 testing which seem to be the least reliable so far.
Click to expand...

I don't understand,why the link is different after I save it. I got it directly from Sports Illustrated website.

It basically says that the NBA and NBA players union are close to a deal allowing the 8 teams to have a scrimmage in another city.
Last edited: Jul 28, 2020

can't post anything with his name in the link. 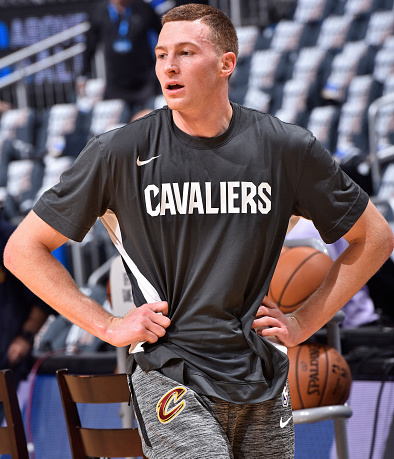 While the other two youngsters faced questions about readiness given their lack of playing experience, Windler was supposed to be the mature, help-now piece, coming into the NBA at 22 years old, with 128 games and 3759 minutes attached to his college resume.

I agree that we need stability in the coaching department. Bickerstaff is really young, which is something I like in a head coach. The rest of the coaching staff is excellent as well.
Last edited: Jul 29, 2020

JJ_PR said:
How is Kenny Atkinson still available? The Cavs should be all over him. J.B. Bickerstaff simply isn't gonna cut it. Dave Joerger is out there as well. He's highly regarded. If we wanted to get creative, why not give Tim Duncan a look? He can't be worse than Bickerstaff.

To be fair, Bickerstaff is still young, which is a point in his favor.
Click to expand...

I like Bickerstaff so far. Maybe he isn't he guy, but he is actually good coaching the flow of the game. He makes adjustments in game and at halftime, esp on defense. The development staff have been good, so I want to keep them.

I like Atkinson. He would work well here, but at some point we need stability more than a slightly better coach.

My thought process is that Hayes or Halliburton might be happier in Cleveland once their rookie contract expires, and be more likely to stick around. If Ball develops into a super-star, he will likely bolt for LA as soon as possible.


I would keep Garland and bring him off the bench. The Cavs aren't going to seriously contend next season anyway. Why not continue to develop Garland and see what you have, if anything?


At this point, if I were Altman, I would stockpile as much young talent as possible.
Last edited: Jul 30, 2020

I would make ZERO decisions based on concerns for what Ball would do in 5 years or based on his father. His father is all bluster. There is no evidence at all that he will steer his kids(becoming men) as professionals.
Furthermore, in the economics of the NBA name the last time a rookie star didn’t sign his second contract with the team that drafted him IF that team wanted him back.

You have to go back almost to Marbury 20 years ago.

If Ball is the top guy on their board when they pick, he should be the pick

MirORich said:
I would make ZERO decisions based on concerns for what Ball would do in 5 years or based on his father. His father is all bluster. There is no evidence at all that he will steer his kids(becoming men) as professionals.
Click to expand...

I agree. I think Lonzo actually liked breaking away, and he's got to have enough of his brother's ear to encourage Lamelo to be his own man. So I'm less concerned about Lamelo being steered by his dad than by Lamelo himself simply wanting a larger media market. Now if I thought there was a massive gap between Lamelo and the other options, I'd take him anyway. But if it is close, I'd consider cultural fit pretty heavily.

I'd still swap the rights to Lamelo for Lonzo. I think he'd be an ideal pairing with Sexton. Good distributor, good size and defense, becoming a good spot-up shooter. And I just admire his personality given his buffoon of a dad.

My thought process is that Hayes or Halliburton might be happier in Cleveland once their rookie contract expires, and be more likely to stick around. If Ball develops into a super-star, he will likely bolt for LA as soon as possible.

I would keep Garland and bring him off the bench. The Cavs aren't going to seriously contend next season anyway. Why not continue to develop Garland and see what you have, if anything?

At this point, if I were Altman, I would stockpile as much young talent as possible.
Click to expand...

Yeah. Sort of like my thoughts on this. Here is the link to my post on another thread where I have mentioned a few draft trade scenarios.
Like a lot of people were saying during the season, Sexton and KPJ should start and Garland should come off bench. If Windler is the player the Cavs had expected him to be, this will be a fun team to watch.

NBA's 8 non-bubble teams could join the bubble once playoffs begin, per report

The eight teams not invited to the NBA bubble may get an invitation after all.
sports.yahoo.com
W

Chris Fedor came up with some stuff today. On the goal for this season:

For us as a coaching staff, our priority is developing the guys that we have here and who we can identify to take the biggest step to make us that team that we want to be. And that’s a playoff-contending team.

That’s what our focus is right now…it was a small sample size, but if you look at the way we competed over that stretch [after acquiring Drummond], there’s no reason why we can’t have that conversation about achieving that goal for next year. - Bickerstaff

As for the coming draft, there’s no variable that will alter the best-player-available philosophy. Not fit. Not a desire to compete next season. Not roster makeup.

The Cavs won’t ignore guards simply because they’ve used multiple first-rounders on the position. They won’t be forced into choosing a more NBA-ready prospect (Deni Avdija, Obi Toppin, Devin Vassell or Tyrese Haliburton) because of their timeline. They won’t shift their view of Memphis center James Wiseman because Drummond will likely be in the mix -- and they’ve already invested plenty in the frontcourt. Some members of the organization still back Wiseman as the best player in the draft. At least one views LaMelo Ball as the top guy. Anthony Edwards has backers as well. There’s no consensus. But the plan remains the same: Take the top guy on their board, regardless of position.

That's the word - best player regardless of position and their goal is the playoffs.

Where is TT going to be playing?
C

fedor is a fucking moron with zero sources.